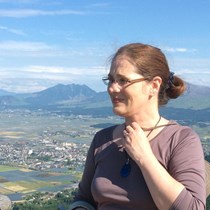 Weʼve raised £530 to donate directly to Aso Shrine to help fund its costly reconstruction after the devastating twin earthquakes of April 2016.

It is now over 5 months since the devastating twin earthquakes that shook the Kumamoto and Oita areas of Kyushu causing extensive damage and loss of life. The dust has settled,and so has the earth beneath our feet (although to date there have been well over a thousand aftershocks) and the reconstruction work has begun in earnest.

Aso Shrine,a beautiful, historic wooden shrine with an imposing two -storey `romon` or tower gate suffered such extensive damage that it will take up to 10 years to repair at a cost of billions and billions of yen. The government will provide funds for the rebuilding of the main tower gate itself,as it is a designated Important National Cultural Property,but money still must be raised towards the repair of the `haiden` (hall of worship) and other structures within the shrine grounds.

Our initial fundraising for Aso Shrine,which included a 40km walk in May from our hometown to the shrine itself,collecting boxes placed in local businesses and crowdfunding ,raised over 1500 GBP, but we still feel we can raise a lot more in this second stage of crowdfunding.
We are hoping that people overseas who may have visited Aso Shrine on their travels,or possibly even lived or worked in Kyushu and who have a special connection with the area, will wish to donate whatever they can to help return Aso Shrine to its former glory.

I have met with staff at Aso Shrine ,they are truly grateful for any help and have fully endorsed this crowdfunding page for collecting funds worldwide.

I'm British,but have been a resident of Kyushu for over twenty years. Aso Shrine is less than an hour's drive from where I live,and over the years I have often visited on various occasions.