Kirsty Baird, founded and initially funded Chief Radio in May 2020. Kirsty's band, 'Hanley and the Baird' released the single, 'Follow the Rainbows' which went straight into the Scottish charts at No.3 and No.27 in the UK Download Charts. The success of this was helped only by the bands fanbase and community radio stations across the country.

Commercial Radio stations chose to play only established artists and songs. At which point, Kirsty identified both, a need for a more level playing field for unsigned artists and more choice for listeners. Chief Radio website

The Scottish station will provide radio play opportunities to unsigned artists and experience to individuals who want to work on or run their own radio shows. There are many ways to be involved as a volunteer. You don't have to be the next 'Boogie in the morning' although you may turn out to be.

Kirsty Baird is also the founder and Director of Sing in the City. She believes that everyone should have access to music. Lack of confidence or money should not stop anyone from taking up an instrument or singing in a choir or starting their own business.

Live music should be encouraged and supported as there is a plethora of original music and artists out there that could be tomorrows number 1 and these people should be on Scottish Radio. Community connections should be embraced, it's our world and we should change the things that need changing to make it the best place it can be.

Kirsty funded Chief Radio and will continue to contribute but running a radio station is costly. If anyone is in a position to help with that we would be incredibly thankful. All Chief Radio advertising money will contribute to the running of the station. 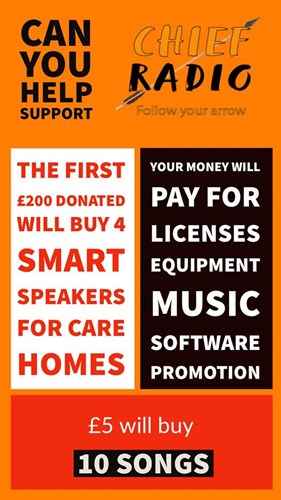 Kirsty is the Director of Sing in the City that has raised over £125,000 for charity and community. She is also one half of Hanley and the Baird band. She has worked in music all her life either as a singer, songwriter, a music teacher / coach and a DJ.