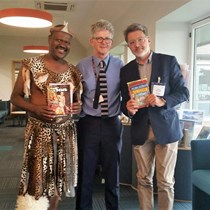 Christ's Hospital school is in Horsham, West Sussex. As a school it's a success story, achieving great results through the hard work of its pupils and teachers.

Kafusi High School is in Matabeleland South, Zimbabwe. As a school it's a success story, achieving great results through the hard work of pupils and teachers.

There, you might say, the similarities end. At Christ's Hospital pupils benefit from the very best of boarding facilities. Pupils can prosper academically in the knowledge that they are comfortable and safe.

Kafusi has recently achieved 6th form status, meaning that students from all round Matabeleland are keen to enrol on A level courses which are the pathway to success. Some pupils come from hundreds of miles away... the problem is that there is no actual boarding provision.

Many pupils at Kafusi resort to what Zimbabweans call 'bush boarding'. They enrol at the school and find a place to sleep where they can. If they are lucky this might be with friends, or in a friendly church. If they are not lucky they may be sleeping outdoors and putting themselves into a vulnerable situation.

The Christ's Hospital monitors' team have decided to do something about this. Recognizing how lucky they have been in their six years at CH, they are trying to raise £20,000 to provide all the materials build a girls' boarding hostel at Kafusi.

For three cold days and nights in November, they are going to go bush boarding within the historic grounds of Christ's Hospital itself - setting up camp in the school quad and attempting to continue with all the rhythms of their academic life - without a boarding house to sleep in.

By doing this they are hoping to publicise the plight of the boarders at Kafusi and to raise donations towards the building of a girls' boarding house at Kafusi to be called HERTFORD, after the now lost Christ's Hospital girls' school.

Christ's Hospital, through its chapel charity fund, has in fact been supporting the community around Kafusi for several years. In 2011, working with the Zimbabwean poet and musician ALBERT NYATHI, we helped establish a cooperative community garden called Thuthukani not far from the school.

In the seven years of the project it has grown from a small project designed to feed HIV orphans to a community resource that feeds the community and raises money for it from surplus food sales. This has had a life-changing effect for many of the inhabitants of this dry and neglected area of Matabeleland.

In recent months the project has expanded to create a partnership with Kafusi High School. Recently the community decided that a fish-farming pond should, for safety reasons, be sited at the school and not in the village. This is the most recent part of the project.
.
In the case of Thuthukani the Christ's Hospital community has raised funds to help the Kafusi community help itself. The same applies to the proposed girls' hostel - donations will be made in the form of materials, and the local community has undertaken to provide the labour to bring the project to completion.

All donations received for this crowdfunding effort will pass through the 'books' of the Christ's Hospital chapel charity fund. Although the fundraising efforts are pupil-led and driven there will be full staff supervision and distribution of the funds will be fully supervised in line with best charity practice.