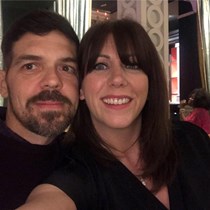 Weʼve raised £39,933 to help scott with his battle against brain cancer

Hope you all had a wonderful Christmas!

So! Can’t believe it’s been 7 months since we set up the just giving page. So much has happened in our lives and opening up to everyone wasn’t easy.

We cannot thank each and every one of you enough for the response we got and the support we’ve had, it means the world not only to me but our whole family.

Please read the update from Scott below:

When I was first diagnosed just over 2.5 years ago, immunotherapy was just hitting the headlines and was being hailed as a huge breakthrough treatment for cancer patients. It seemed like the way forward, so this had always been an aim for us if things got that far, and if we raised enough funds to pay for it.

So, just to recap- My last chemotherapy was late February, and it seemed like it was destroying me. quicker than the cancer, So, i had to stop taking it.

I was then told in MAY that the tumour had regrown and had spread into the ventricle,  and that surgery was not an option any more.

This left us with no treatment available other than what had already been given to me by the NHS. when we were given that news, i realised that it was down to me to find a way of treating myself. After various discussions with my family, we decided to set up the just giving page with immunotherapy in mind.

The just giving page went crazy and you all donated and helped raise funds, amazingly to make it possible for me to give immunotherapy a go. We booked an appointment at the Iozk clinic in Germany at the end of July, however, my oncology team advised me to have a routine follow up MRI scan before travelling.

I had the scan in August and got the results a few weeks later.

The scan showed very little progression! This was not the worst news we could have received ?? at this time, it also seemed that the research & alternative therapies I had been doing at home was having an effect. The radical diet and lifestyle changes, together  with all the other ‘alternative’ treatments  were slowing the tumours' growth down. Statistics for my type of brain tumour,  GBM4,  show these tumours can grow very aggressively.

The alternative treatments that I had been doing, consist of a very strict vegan, 100% organic plant based diet. Lots of fresh made juices, smoothies and salads, as well as organic fresh home cooked vegan meals several times per day, no processed foods whatsoever and certainly no sugars except fruit sugar.

I have also been taking a vast combination of supplements - Vitamin K,  Boswellia, Vitamin C, Siberian ginseng and of course Medicinal Cannabis Oil to name a few.

I quite often uses a castor oil pack, either on my liver- to help eliminate all the toxins I've had over the last 2 years caused by the chemotherapy and other medication,  or on my head for healing qualities following intense readiotherapy.  Through researching other alternative therapies suggested to be beneficial for cancer patients, I have had quite a few therapies which I have found to be helpful. I now do daily coffee enemas, have reflexology, reiki, gong therapy; and yoga which i finds both calming and empowering.

My diet and changes to his lifestyle are a constant, and are not always easy to keep up, however, they have been, and are still a better alternative to more chemo, which was the only option the hospital offered him

I had another routine scan at the end of October ago and received the news that it was STABLE! This is a truly amazing news.

It’s really unbelievable that in the 3-6 months between each scan (MAY, August & October) there has been NO growth to my tumour,

My consultants are amazed and want to know what it is that I’ve been doing. They also made it clear not to change anything as what I’ve doing is working and has stopped the tumour from growing.  I really needed this news, as times can be tough and days can be a big struggle for Me both mentally and emotionally. The aim now has to be to improve on what I’m doing.

The news was honestly some of the best news that anyone in my position could wish for.

I need to continue with this diet and alternative treatments even when the going gets tough as they're working.

Me & chloe had both really felt immunotherapy was the best & possibly only option, however, i made these changes to my diet and lifestyle whilst waiting to go to Germany, ive realised this is the way forward. Having researched more into immunotherapy and watched documentaries, results aren’t currently as good as had been expected. The treatment is very invasive and can cause many long-lasting debilitating or even life threatening side effects and as my consultant pointed out in the summer, it’s quality of life over quantity.

The funds raised will go a long way in keeping me alive and able to continue to stay alive, all funding raised will be used for my continuing treatment. Since going 100% natural, more avenues and clinics around the world have been opened up to us, which all focus on reversing cancer naturally but under medical supervision. What Im doing can be dangerous and requires full time commitment, if i could get to one of these clinics around the world it could be the final piece to reverse my cancer. There is a clinic in Mexico that Ive has been looking in to and following their protocol. It has shown good results in reversing cancer. If i can get to this place or one of the newer centres across the world, then this would be amazing.  In the meantime I will continue self medicating with the support of my wife and doing all i can to reverse this virus and stay alive as long as I can for my young family.

Thank you all so much for the support please, please please feel free to share Scott’s story, the funds will only go on anything that will keep Scott alive for as long as possible. Circumstances are constantly  changing; and Scott and our young family have to adapt to these changes in all areas of our family life. The donation page is still open and it would be great to reach the target to enable Scott to continue his journey .

With love and thanks chloe, scott and family

Scott has GBM4. For those of your who don‘t know what that is, its brain cancer. Stage 4. The most aggressive type. Before scott’s diagnosis, I wasn’t even aware that brain cancer was a ‘thing’. But it is, And a very nasty one.

2 years ago, 23rd of march 17, i took scott to hospital as i was concerned about him. He had headaches and wasn’t quite himself. Having been together for 18 years then, you know someone pretty well. Wasn’t expecting what they told us though! A tumour and a big one. 6cms! He had surgery within two weeks. The surgery went well but then we received the devastatings news that its was GBM4. Glioblastoma multiforme. The worst type. we stayed positive as possible and was offered the standard treatment of combined oral chemo and radiotherapy for 6 weeks followed by 6 cycles (which were months too) of oral chemotherapy. This treatment is gruelling at the best of times but made harder by staying as positive as possible for our 3 young children.

Scott lost his hair, weight and confidence. But managed to amazingly complete the trearment fully which is a reflection on how amazing he is.

He had 6 months of ‘normal’ where things felt good and he was doing really well, kids were happy and we were a happy little family. Then sadly a routine mri showed a regrowth. He had the 2nd surgery last june. Although the surgery went well it has left some side effects of personality changes and some memory loss. His team offered him a different type of chemo. This has had awful side effects and resulted in him being hospitalised over christmas for 14 days with treatment related sepsis. Was really hard on him, the children and myself, not to mention the rest of our families. scott recovered from the sepsis slowly and was gaining strength and his health was returning. Until 23rd may. Our youngest sons 6th birthday and scott was told that the tumour was growing again and that sadly surgery WAS NOT an option this time as it‘s growing into a ventricle.

Please help keep this amazing man alive for longer to create memories for our 3 children, Jackson 11, Alannah 8, and Austin 6 and to try and beat this truly awful beast of a disease.