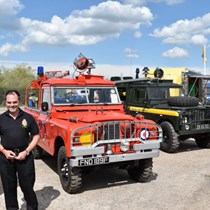 Weʼve raised £710 to Display store and maintain the unique collection of the Museum of RAF Firefighting, in it's new home . firemuseum.uk

Britain’s only MOD fire services museum, based at RAF Scampton, has been closed down due to space being required for the 2017 Scampton Airshow.

A team of 35 volunteers at the Museum of RAF Firefighting at Scampton, have been running the attraction for 14 years on authorised temporary use (known as an MOD encroachment), housing decades of memorabilia and 47 fire engines.

They have until January 3 to vacate the annex of Hangar 2 and are looking for a new home for the popular visitor attraction, as the space is required by airshow organisers.

Items currently on display are in the process of being dismantled, catalogued, packed and placed in storage provided by the RAF base, awaiting possible relocation.

““The dedicated team of volunteers won’t give up on the prospect of creating another location for this popular visitor attraction for all its visitors and veterans.””

He added that the museum, which is currently ranked as 10th on TripAdvisor out of 71 things to do in Lincoln, had grown in popularity over the last four and a half years.

“The museum is very grateful to successive Station Commanders for allowing us to have a presence at RAF Scampton for the last 14 years.

“Please understand that the decision to close the museum has not been taken lightly. We were always aware that we were guests of RAF Scampton and as such, service needs must always take priority.

“Please avoid doing anything that could affect the relationship that we have built with RAF Scampton by entering into any form of negative comment towards the station executives and the RAF/MOD as a whole.

I am a proud volunteer at the Museum of RAF Firefighting, having been brought up with the RAF Fire Service, with my late father, who was stationed at RAF Scampton when I was born. We have a dedicated team and rely on public support and donations to keep the dream alive !