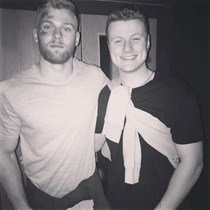 Weʼve raised £125 to help Andy Cleaver who suffers from lung disease. Andy is in desperate need of a mobility scooter.

Since 2014, Andy Cleaver from Cheshunt has lived with lung disease, always striving to live a normal life with his family and beautiful nieces and nephews. Andy has had problems with his lungs from birth, where his insides weren't joined together how they should be. He needed reconstructive stomach surgery and a gastric tube inside of him - meaning he couldn't eat, drink or even talk until he was five years old - when it was finally removed.

From five to 34 Andy managed to live a relatively a 'normal' life, he never won sport's day races at school but he still did what everyone else did, just using a nebuliser to help him breathe. But then summer of 2014 hit and Andy nearly died. He suddenly fell into a coma for a month and awoke to an entirely different life - needing 24-hour oxygen, a ventilator while he sleeps and being told he would never eat or drink again.

Andy now aged 40, was told by medics he would not be able to have surgery because of his previous surgeries as a child and his lung disease. In the space of a month, his whole life changed - but Andy has never let it affect him, as long as he had his oxygen.

As Andy's health has unfortunately deteriorated it has now left him unable to walk but still wants the independence of being able to go out. To help Andy continue a normal life we are asking to raise money for a mobility scooter. Any and all donations would be highly appreciated! Thank you for your support!