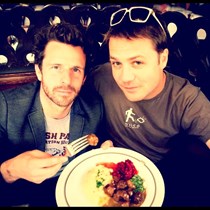 On April 7th 2017, our beloved friend, Chris Bevington was tragically taken from us in the terrorist attack in Stockholm, Sweden.

Chris would be overwhelmed by the outpouring of love we have seen in the UK, Sweden and across the world for him and the other victims of this horrendous attack.

People are asking how they might be able to donate, or show their love and support, so a few of his closest friends have set up this page.

We are raising money to provide support for his young family and to create a legacy that is as meaningful as his life was.

Chris was passionate about everything: his family, his friends and his music.

Music was his lifeblood and led him to meet the girl who became the love of his life and the mother of his children. As his lasting legacy, we want to find a way to bring his passion for music to people who would not otherwise experience its life-shaping benefits.

Although no amount of money will bring Chris back it will help support his family now he's gone and be the foundation of a positive legacy.

James Hunt and I were Chris’s Best Men at his wedding. I am godfather to one of his sons, James and his wife are godparents to the other. This page has been created by Chris’s closest friends to raise money for his family and start a registered charity to further a cause, or causes, close to Chris's heart. James and I will decide how to distribute any money raised between his family and the registered charity. We will post updates here, as the vision for the charity continues to crystallise and about all financial distributions made.