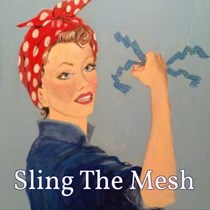 Weʼve raised £1,692 to Send to the young sons of Chrissy Brajcic. Chrissy died after battling sepsis caused by a TVT mesh implant

This fundraising page will run until New Year's Day 2018.

Chrissy Brajcic was a young mum who was fit and active with a successful interior design business. She suffered mild stress incontinence after the birth of her sons Ben and Jake. Like thousands of women worldwide she had an operation called a TVT mesh implant to fix it. It is also known as a tension free vaginal tape. Surgeons assure women it is a gold standard, low risk , minimally invasive fix, that takes just 20 minutes as a day case operation. 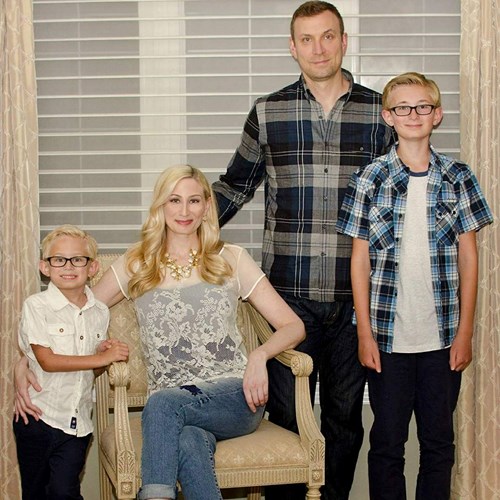 For Chrissy, her operation in 2013 was to set up a chain of catastrophic reactions hat led to her death on November 30, 2017. She suffered debilitating pain then began to get infections. At first, antibiotics would fix it. But over time Chrissy became resistant to the antibiotics and would end up in emergency A&E at her local hospital at least once a month, where she would need super strong medication pumping into her to control the sepsis. A biofilm developed around her mesh implant. In the end it took her life. 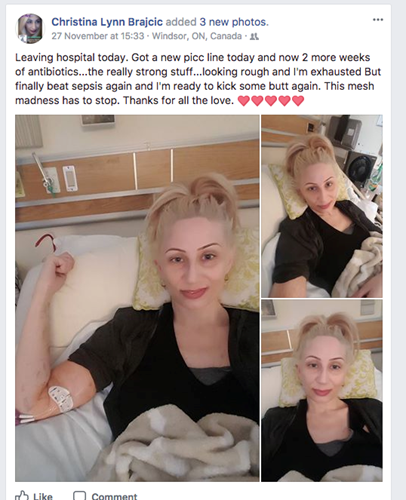 Chrissy was a courageous woman who, despite her suffering, remained, calm, strong and beautiful and determined to spread the message to stop other women suffering as she did. Here she is in a Canadian documentary on the dangers of surgical mesh. Let her death not be in vain. Globally ,campaign groups are calling for surgical mesh to be banned as we say the risks are too high. They are life changing, catastrophic and can cut in years after the plastic mesh has been permanently implanted into a patient's body.

Please watch her story here at the start of this CTV documentary. We are fund raising in her memory for her sons Ben and Jake Canadian CTV documentary featuring Chrissy

The mesh scandal is global affecting thousands of women. In the week Chrissy died, health watchdogs in Australia banned one type of prolapse mesh and one type of incontinence mesh. In the UK one type of prolapse mesh is to be given a back door ban. But who is to blame? This article The transvaginal mesh scandal discusses the poor regulatory systems world wide that means medical devices get very little safety checks before being launched onto the market. 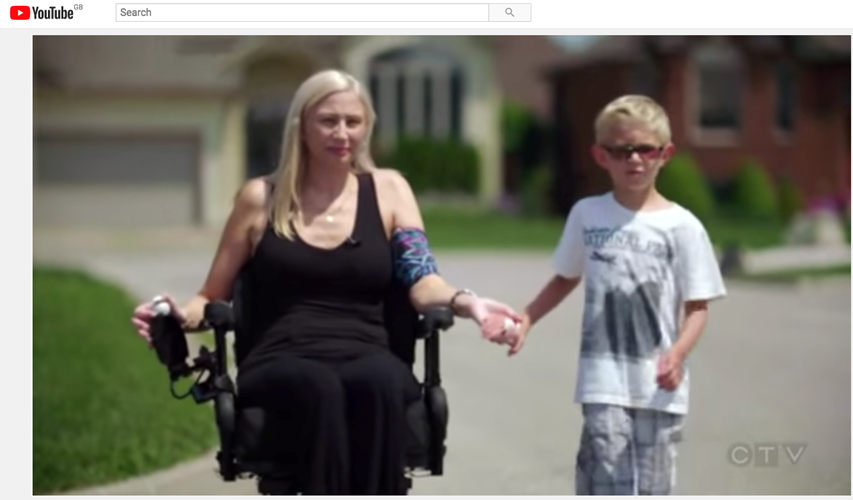 Some of the other groups globally who support and advise. Most are on Facebook. Here are those with web pages.

A LOOK AT WHAT IS BEING SAID GLOBALLY:

Scottish campaigners say a report into mesh safety is a whitewash Mesh was suspended in Scotland in June 2014.

Im a UK journalist who runs Sling The Mesh campaign - one of many groups globally who support, advise and educate on the risks of surgical mesh.