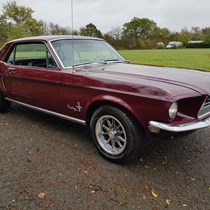 Weʼre raising £2,500 to To assist the partner of a good friend who has been involved in a freak accident

Hello, This is a story about a guy I have never met in person.

My name is Peter Cavallo and I am a classic car trader in the UK, A fellow classic car trader a few years back put out a call on social media that he needed a difficult to find brake part for a US made car. I emailed and said "I will have it to you in 2 days" and that started a wonderful long distance friendship. See Chris is in Wales and I am in England. He helped me, I helped him, we sent each other customers, assisted each other with car problems and to be honest just made each other laugh and be better people.

My wife and I call him "Crazy Chris". Why Crazy Chris? This guy has a laugh that should be in a funhouse. Every call ended with an absolute blast of his hysterical laugher and he would be gone.

So just a bit more info about Chris before I say what happened. Since letting folks know about what has happened I have had a few phone calls. Just regular folks who happen to know both myself and Chris and were concerned about him and wanted to know more. Strangely each person told the same story. They either never met Chris or had a fleeting meet with him at one time or another, but each one cherished the phone calls and texts which, as with myself, always ended up with a bellyful of laughter. No one understood how he could interact with so many others and also get the huge amount of work done to the cars that he sold. See, Chris is a painter of Classic cars. He actually won't buy a classic car in America and ship it over unless it needs paint. He loves painting cars. Its his passion

So to the horrible part. This morning I received a text from "Cath" the partner of Chris. It seems Chris was working under a car in his inspection pit and due to a freak accident the pit had petrol fumes in it and they caught alight. A spark? static? we will never know. Chris was badly burned and his life was saved by Cath who pulled him out of the pit and free of the building. The building and several of their cars were destroyed.

Chris is now in Intensive care in a medically induced coma with burns over 30% of his body. I just want to raise some funds firstly to assist Cath with money to run the household in at least the short term and also because, well, because I don't know how else to help. I have offered my physical help to Cath if she needs it and she only needs to ask.

Chris is still on a ventilator and in a coma. They are starting the operations on his hands and arms on Tuesday and further operations in 2 more weeks. The estimate is 40-60 days in hospital

One bit of good news, they are hoping to take him off the breathing machine this weekend which I hope means his lungs were not too badly damaged by the fire.

Thanks for reading and for keeping Chris Ellis in your thoughts

Lead photo is a car Chris stripped down, painted and sold for me, he said he "Just wanted to help me out"