Church Gardens is the original walled gardens of the Harefield Place estate which are probably amongst the oldest surviving walled gardens in England, the walls date from the late C16th and early 17th Century.

Kay and Patrick McHugh purchased Church Gardens, Harefield in 1995, after constantly working on the derelict property for 2 and a half years they moved in with their 3 year old daughter and 4 week old twins daughters in 1998.

There are three walled areas; the kitchen garden, a smaller courtyard behind the main house, and a final much larger area comprising of a nuttery/orchard. This larger walled garden is one of the only surviving renaissance pleasure gardens in the country and includes a unique arcaded wall. It is believed that this mysterious wall was constructed sometime between 1601 and 1636 for Sir Thomas Egerton and his wife the Countess of Derby- the residents of Harefield Place at that time. The function of the arcade niches has been a matter of great debate. Locally it was believed to be a 'bee' wall (unlikely due to the size of the alcoves) or the alcoves could have been used to protect delicate fruits, like an early orangery or to display life sized statues. The most interesting possibility is that it was constructed as a backdrop for a performance of a masque called 'Arcades' written by the poet Milton with music by Henry Lawes which was written for the 70 year old Countess of Derby as an entertainment to celebrate her life.

We are looking to completely restore this wall back to its former glory so our visitors to Church Gardens can enjoy it as much as the former owners. 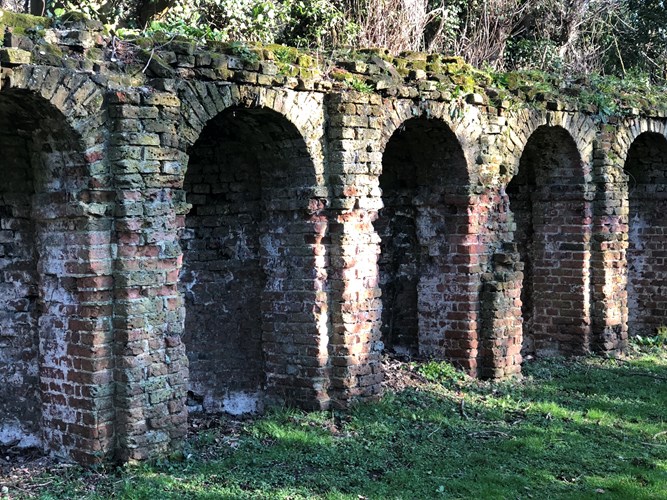