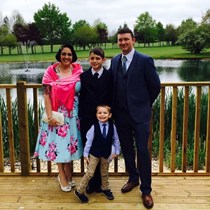 In August 2016 Aaron was diagnosed with a rare cancer called alveolar rhabdomyosarcoma, a soft tissue and bone cancer at just 28 years old.
After being misdiagnosed for so long by the time the cancer was detected behind his left cheek it had already spread throughout the soft tissue and bones in his body. We were told the cancer is very rare, extremely aggressive and incurable at this late stage. They told us that the visible tumours weren't the only problem, as if things could get any worse, Aarons body would be full of cancer cells that are simply too small to show up on the scans until they grow into larger tumours.
The cancer usually has a good initial response to treatment, but then tends to spread and grow quickly again afterwards. We did not ask for a time frame but have repeatedly been told it is extremely aggressive and fast growing.
Although Aaron is currently doing very well and regaining his strength the treatment currently available to him on the NHS is not a long term solution. The cancer is aggressive and has a very high return rate, chemo and radiotherapy won't stop this. We believe his only chance at long term survival is a treatment called immunotherapy. Unfortunately this treatment is very costly and must be obtained privately. This type of treatment is becoming commonplace in other countries and has proven to be very promising for Aaron’s type of cancer, but the rarity of rhabdomyosarcoma means that it likely won’t be available on the NHS for some years.
We hope Aaron can find success with this treatment, paving the way for others to be able to obtain it in the UK. Although the doctors have told Aaron his cancer is terminal, we will never give up hope and strongly believe if he can get this treatment it will give him many more years with the people he loves. It is for this reason we must ask for help in this stressful time.

On October 15th I will be running my first 5k run. I am a beginner to running and I am training hard to achieve my goal. Please sponsor me to help raise awareness and funds for Aaron's Battle. I have much love for these guys ❤️ Let's help Aaron get to his treatment. Xx