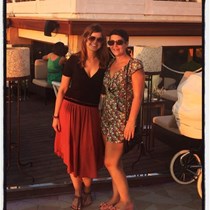 Elliot arrived in Thailand only a short while ago. But in this time I have gotten to know him quite well. Elliot recently turned 27. Anyone who meets Elliot for the first time, likes him immediately. He has a super bubbly, outgoing personality and always seems to find a way to make others smile. He is the kind of person that can make friends with everyone.. even those who have very different lifestyles and personalities to his. Those who know him on a more personal basis know that he is an amazing and loving person who has overcome many difficulties in his life. Though, I would have never guessed it because he is quite often smiling and making everyone around him laugh. He is always there for others and would do just about anything to help any of his friends. He is dependable and fiercely loyal to those he cares about. I met him on a night out and we became friends. I saw he wasn't drinking but in the moment, didn't ask why. I didn't realise at the time but he was suffering from PTSD and attempting to get medication levels sorted. He had tried a few different ones but the Drs couldn't get the levels right. I later found out he went back to his Dr. several different times change his medications, in attempt to live a normal, productive life as they were making him too drowsy during the day. He was then put on different medications for day and night.
On the night of Monday the 12th, Elliot was on his way to meet up with some friends on his motorbike, and not being 100% alert, he got into an accident. He wasn't wearing a helmet. He was unconscious and suffered amnesia from the impact to his head. When he came around he was in the hospital. He was about to sign a lease at an apartment, move from the temporary guesthouse he'd been staying in and find a job teaching English, which he'd done previously in Japan. His motorbike is a rental which he had rented out for the month to accomplish all his goals. Without a moment's notice his life had been turned upside down.

Any money raised will be spent on medical bills which the total cost at this time is unknown due to ongoing treatment, follow up appointments, wound cleaning, and multiple medications he needs to keep taking for his injuries. No amount is too small or too large.