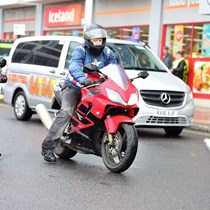 Weʼve raised £720 to Help pay bills while I am not earning any money and until benefits finally get sorted. Any donation helps.

Since the start of 2021 (maybe even the end of 2020) I have not been myself, getting random issues with my memory or motorskills plus falling ill quite quickly with stronger symptoms. But I just shrugged it off as I always do. The year started with Covid-19 and by started I mean on new years day, then afer a week of that and self isolation I developed a stomach bug the rest of the family had.

Then come February I got the first Covid jab and fell incredibly ill necessitating more time off work sick.

It was in March or April where things really started to come to a head with a seizure at work. Something I had never had before. I spent 8 hours in hospital that day only to be told "We can't find anything" but was given an apointment for a clinic but that was way off in July. I, being me, just went to work the next day and was sent home by my manager as I looked bloody awful. So thats another week off sick, but it lead to more time off as when I attempted to go back to work I barely lasted a few hours before admitting I wasn't ready.

After being badgered by family I went to hospital to get checked again but they just did not take it seriously leaving me waiting 8 hours in the day pushing me from pillar to post for random scans and whatever. I was not in the mood as my brain at this point was starting to show the signs of my neuroligal issues which pretty much included what is essentially a dual personality. I left after 8 hours of just feeling like they did not care. It took me two hours to get home and as I walked through the front door the hospital phoned asking where I was. It took them 2 hours to realise I was gone, that shows how interested they was in my case. They asked me to return, and I just said "I am very sick, I am very tired and I am going to bed.

Two days later my brother took me back as he did'nt believe the hospital had treated me bad as he thought it was down to my mood swings and change of personality. After 8 hours he had to leave and I followed.

The final straw though was when I had another personality shift early on May 1st and was falling about all over the place knocking things down. An ambulance was called and I was taken to the same hospital that had given me the brush off. The thing is, I do not remember any of this, This is where I fully shifted over to the other reality being the paranoid guy thinking everyone was trying to kill him. I spent nearly two months in that hospital and they then gave up and shifted me to another hospital that deals with brains but mostly stuff like rehabilitation. Luckily for me one of the doctors there realised I did not belong there as my body movements were off, struggling to keep my balance and hands shaking etc. I do not remember this hospital and everything I know now about these two hospitals is from family, friends & hospital staff who helped fill me in. So within 10 days I was outta there and into a proper hospital. I regained my personality within 2 weeks but lived a small portion with a mix of both so I actually did experience of some of the horrors Mr Paranoid was going through. I'm not gonna go into the ins and outs of what I went through in this final month but come mid July I was finally diagnosed as cancer with neurological issues. The best way I can describe it is that the cancer did not create the neuro issues but it did activate dormant ones.

As I am currently not allowed to work, have been told to not use public transport my bike license has been cancelled, and SSP has dried up I have applied for benefits but am still waiting for them I am curently relying on the generosity of others.

There is no obligation to donate, it is entirely up to you, but whether its £1 or £100 it is all appreciated. And despite the jokes, it will not go towards a PS5.

This is a pretty rare cancer but should be dealt with quite easily, and doctors have asked for my consent to allow my medical records to be used for further research. I have asked if it can be named after me, so if you ever get a case of the Colins you know what it is ;)