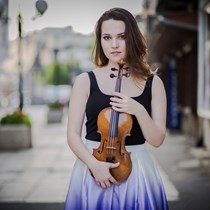 We are a group of musicians and filmmakers who passionately champion contemporary music written for the baroque violin.

With your donation we will inspire contemporary composers to create new music for this wonderful instrument, showcasing their work in recitals and filmed productions.

Sure, there’s some really great music out there by Bach, Handel and lots of composers you’ve never heard of, but we’re limited to performing music from only a small period in history. Things can get repetitive very fast when you’re planning your next concert, so why not get someone to write you something new?

Trouble is, baroque instruments are fairly niche and few composers have the chance to engage with them, let alone write new music or be commissioned to use them.

That’s why we launched a composition competition, to inspire and challenge composers from around the world to write short pieces for baroque violin & harpsichord. To help us pick the best 3 pieces, we’ve recruited baroque violin legend Simon Standage and harpsichordist Steven Devine for our judging panel.

We’ll then programme each of the winning pieces in recitals next year.

For anyone that wasn’t already aware that audiences were changing, the move to online concerts during the pandemic has shouted it loud and clear. We’ve been engaging audiences with filmed productions of baroque music for a while now, and that’s why we’ll be filming each of the winning compositions, helping to promote the composers, their music and sparking interest in further compositions.

From baroque to contemporary, Ada is no stranger to the modern or baroque violin. An international prize winner, Ada's career has seen her perform widely throughout her two home countries of Poland and the UK. Appearing with the Gabrieli Consort, The English Concert, The Sixteen, St James' Baroque and Florilegium she has performed at many of the UK’s most prestigious venues and festivals including Buckingham Palace, Royal Festival Hall, Barbican, Royal Albert Hall, Cadogan Hall, St Martin-in-the-Fields and the Royal Opera House.

Our film director is Simon Helbling. He started working as a theatre director and shot his first short ten years ago. Since then he has made several shorts, music videos and commercials. In 2017 he commenced his studies at the London Film School and graduated with an MA in filmmaking with The Weight of the Land. Putting his creative heart into a story means it will be honest, emotional and somewhat quirky.

Nick leads a complicated career in all sorts of musical pursuits and brings his organisational expertise to our group. Starting out as a musicologist and 19th century expert, he’s done everything from musical outreach and giving pre-concert talks with international artists to working on the management team for The English Concert. Conductor of the London ensemble Meridian Collective he also loves to perform, recently appearing on baroque violin at Shakespeare’s Globe in The Secret Theatre.

In 2019 we wanted to find another way of connecting with our audiences; one that is modern, visually engaging, and offers something more than just capturing a few overly dressed people on stage. Instead, we took one of Biber's reflective and highly virtuosic sonatas and created this short film:

Organising the competition, arranging concerts and producing the films can be expensive, and while we always look for economical options there are just some costs we can’t avoid. Your donations will help us hire rehearsal spaces, concert venues and film studios. They will help us hire harpsichords and film equipment, arrange transportation and pay for the film crew, along with all those little costs which mount up.

If we raise more money than we need, we’ll put it towards promoting our work further afield and organising the next instalment of our competition.

We believe passionately in our mission, but we can’t do it without you. Join us as we create something new and inspiring.

From back stage passes to pre-release downloads, we've organised the following rewards to help us say a big thank you in helping us reach our target!

IMPORTANT: Justgiving passes little or no details to us after your donation, so please get in touch with us directly to keep up to date with the competition and to claim your rewards. Please email ada.witczyk@gmail.com

£30 Artist's impression - not just a dab hand on the violin, Ada will paint or draw an artistic thank you card just for you

£75 Lights, camera, action! - Come and watch the magic happen at one of our film shoots with our back-stage pass

£200 | Private lesson (limited availability) - Make some music with our maestro in a private violin lesson for you or a friend when you donate £200. (London lessons are in person, outside of London and rest of the world via Zoom/Skype)

£200 | Film consultation (limited availability) - need some help with your latest video project? Donate £200 and receive a consultation on your film work.

NB: Once the campaign has ended we will be in touch to arrange your rewards. All donors of £10 and above will receive the baroque mix playlist, and all donors of £50 will receive the pre-release download of our films. All other rewards, however, are specific to their respective donation level.

An international prize winner, violinist Ada performs widely throughout her two home countries of Poland and the UK.