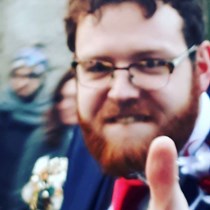 £0
raised of £35 target by 0 supporters
Give Now
This page isn’t active yet.

Weʼre raising £35 to Help Consignia to pay for an advert on mumbletheatre.net so they will come and review our Edinburgh Fringe show.

We are Consignia, a experimental 'Dream' Group. (We don't perform sketches, they're dreams) This year we are talking an absurdist play up to the Edinburgh Fringe. It's called Consignia's Panopticon and it's based on the idea of the Panopticon, a prison designed by philosopher and social theorist Jeremy Bentham. In the play we bravely ask the question, 20 years on from New Labour’s 1997 election victory, 'What would have happened if New Labour had been a Maoist collective who sought to harness the power of atoms to enslave the population and elevate all life on Earth to a higher state of consciousnesses?' The show tells the story of two inmates trapped in one of New Labour’s Panopticons and their brave fight against the oppressive and dictatorial ‘Floating Atoms.’ It promises to be a bat-shit crazy, unique theatrical experience and an unforgettable show in the true spirit of the Fringe.

However, there is one problem. No one wants to review our show, its on at an awkward time in an awkward venue, but then earlier today, a small chink of hope appeared, mumbletheatre.net replied to us saying they "can only gaurantee a review to advertisers - its £35 now, and you also get a preview-interview"

What an offer! Unfortunately we can not afford £35. So we are humbly ask you, earth's population, to donate to make the dream of getting to see what some student thinks of our show a reality.