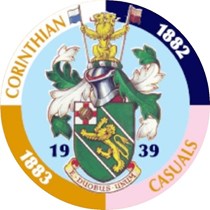 Corinthian FC was founded in 1882 with the aim of bringing together the country’s best amateur footballers. Within four years there were nine Corinthians in the England team, and on two occasions the National first XI consisted entirely of Corinthian players. We also took football round the world, helping to popularize the game throughout Europe, South Africa, Canada, the USA and South America. In 1910, after a visit to Sao Paulo in Brazil, the locals were so impressed they founded a Corinthians club of their own. Today, Corinthians Paulista is one of the most successful clubs in South America!

The Casuals were founded in 1883 and were a strong force in the early amateur game - runners up in the first FA Amateur Cup Final in 1894, founders members of the Isthmian League in 1905, and winners of the FA Amateur Cup in 1936.

In 1939, these two great clubs merged to form Corinthian-Casuals FC.

Since then, the club has always maintained its 100% amateur policy and continues to promote the proud traditions of fair play and sportsmanship. Staffed entirely by volunteers, Corinthian-Casuals FC currently competes in the Bostik Isthmian League and is the highest ranked amateur football club in England, while our Youth Section runs over 20 different teams for youngsters from age 7 upwards.

Today, our historic Football Club is hugely appreciative of the support we receive, both from our local community in the Royal Borough of Kingston upon Thames and elsewhere. But we need YOUR help too! Every donation, however large or small, goes directly towards improving the facilities at our great club

Corinthian-Casuals FC was formed in 1939 when England’s two great Amateur Football Clubs, Corinthian FC and The Casuals FC merged. Today, the club is still 100% amateur and continues to promote the ‘Corinthian Spirit’ of fair play and sportsmanship both on and off the field.