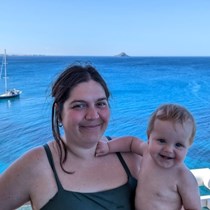 Weʼre raising £10,000 to Support the family of Cornelius Koundouris

Cornelius Koundouris lived in the shadow of death ever since he was born. He had a chronic heart condition that required lifesaving surgery as an infant. Against all the odds he survived major heart surgeries, a pacemaker, and survived clinical death twice when his heart stopped beating. But on Friday 9th September he was taken from us for good. He was only 38.

Cornelius died very suddenly in the arms of his partner Celyn and in front of his daughter Clio. They were visiting Syros for a family wedding. Celyn is currently alone with her baby in Greece, faced with paperwork and the costs of repatriating his body back to the UK, and organising a funeral for him. Clio was due to celebrate her first birthday in a few weeks and now they will have to say goodbye to her Daddy instead.

Cornelius and Celyn loved each other, joyfully, and supported each other through his medical emergencies and several family tragedies. They were an inseparable couple, even working together in the same job, bringing their baby to work alongside them. Now Celyn is left with the unthinkable prospect of raising her child alone.

All the money raised will go directly to Celyn and Clio, to be able to say goodbye and start again. Now is the time to donate, to show Celyn and Clio they are not alone, and to soften, if we can, this unspeakable tragedy. Thank you with all our hearts, from their friends.