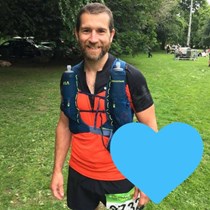 Weʼre raising £10,000 to Thumbs Up For Charlie Foundation

I am trying to raise funds for Thumbs Up To Charlie Foundation, this foundation has been set up in memory of Charlie John Robinson who in April of 2021 at the age of 5 years lost his 3 year battle with Ependymoma Brain Tumour. This Foundation has been set up by Charlies parents John and Nici Robinson, with the purpose of supporting families through the difficult prognoses of paediatric brain tumours and other paediatric life altering illness's both in the local community and further afield. Their sole aim is to support and enhance families lives in their time of need.

To raise funds I have undertaken a huge personal challenge, I have committed to train from being a non-runner and become an Ultra Marathon Runner.

In January 2021 I decided that I would enter an Ultra Marathon in May as personal challenge to see if I could train from being a non-runner and become an Ultra Runner, I decided I wanted to see how far I was capable of running in a single event.

Then in April 2021 Charlie John Robinson at the age of 5 years lost his 3 year battle with Ependymoma Brain Tumour. I decided that I wanted to help in anyway I could and my original personal challenge spiralled into a challenge of massive proportions, and I am now entered into a series of Ultra Marathons across the year of 2021 there are six in total all different in there own unique way.

There are two reasons for doing these Ultra Marathons these were to inspire other normal people like me that anyone is capable of anything if your prepared to dream big and work hard beyond what you think you are capable of. More importantly to give something back, to do this I want to help raise awareness of a special boy called Charlie Robinson who passed away in April of 2021 and in his name the Thumbs Up For Charlie Foundation was founded.

I will be enduring these huge Ultra Marathon distances in memory of Carlie Robinson and to raise awareness and support for the newly formed Thumbs Up For Charlie Foundation.

The story to now!

Going from being a non-runner to an ultra-runner I had to train as hard as possible and as smart as possible to avoid getting injured and learn as much as I could before I started doing these huge events. From January to May I spent many hours a week training in the gym, running, walking late at night in the dark, rain, sleet, wind and snow, which led to my first Ultra Marathon of the year.

My first Ultra Marathon of the year, The Lap Ultra Marathon, 47 Miles/ 75km, a route that circumnavigates Lake Windermere and traverses over several near by mountains, in the Lake District which I completed in 10 Hours 56 Minutes.

Two weeks later at the end of May I took part in Windermere Marathon 26 Miles/ 42km which hugs the shoreline of and circumnavigates lake Windermere in the Lake District national park I did this as a training run which I completed in 3 Hours 53 Minutes.

After a few weeks more of training I completed my second Ultra Marathon of the year, This was called The Wall Ultra Marathon and it was 70 Miles/113km from Carlisle to Newcastle following largely Hadrian’s Wall national trail which I completed in 15 hours 2 Minutes.

Taking July to refocus and recover and start training again in August I tackled my third Ultra Marathon of the year and the longest I would do by far, The Dales Way Ultra Marathon 82 Miles/ 132km from Windermere in Cumbria to Ilkley in Yorkshire travelling along The Dales Way National Trail which I completed in 23 Hours and 10 Minutes.

After what felt like a very short gap and a hard month of training it was time for my fourth Ultra Marathon of the year and this one had the most elevation so far over 10,000 ft in total, The Cumbria Way Ultra Marathon 73 Miles/ 118km from Ulverston in Cumbria to Carlisle travelling along The Cumbria Way National Trail which I completed in 22 Hours and 31 Minutes.

My fifth Ultra Marathon of the year, The Yorkshire Three Peaks Ultra Marathon 70km/ 40 Miles. Many people know this route as a 25-mile walk taking in the three peaks of Yorkshire over a 12-hour average walk time, This Ultra Marathon is the same three hills with an extended, self-navigation route over 70km and over 8000ft of ascent with a cut of time of 18 hours. I managed this race in 10 hours 41 minutes.

A last minute descision I added a extra Ultra Marathon to my callender. Mainly as I thought not doing one in November left a gap in my challenge. This was the White Rose Ultra 30 Miles/ 50km of trails and roads with an 8 hour cut off and it was nice to do a race that i finished in dayligh for a change. I did this race in a time of 5 Hours 58 Minutes.

I was due to be doing The Cheviot Goat Ultra Marathon on this day but late on Friday 3rd December the event got Postponed due to the storm in the northeast 6 days prior. Late on Friday night I came up with a PLAN B. To run from Kendal Castle to Preston via a series of footpaths, disused canals and the entire Lancaster Canal system. This is 92km/57miles, I thought my time for this should be roughly about 12 hours. Unfortunately that was not how things went, I set off well at 6am running a nice steady 30km in about an hour. After this my legs completely failed me and I ended up walking for the next 38km. Trying to speed up but failing every time. I had to retire my effort at 68km/ 42mile at my home village of Catterall. Undefeated I will rest up and return to do this again in the new year and complete this PLAN B personal challenge.

As a training run I decided to enter a 40 Mile/ 66km Ultra Marathon called the Winter Wychavon Way Ultra. This race cossed the length of my birth county Worcestershire. It was a muddy, challenging route through farmland and on river banks. Not my usual hilly terrain but a great challenge. I did this race in 9 Hours 26 Minutes.

I took on a Ultra Marathon that pushed me to my absolute limits. The Northen Traverse is a 190 Mile/ 306 km non stop race along the famous wainwrights coast to coast path. I completed this in (84 Hours 23 Minutes) 3 Days and 12 Hours and 23 minutes it was non stop, eat, sleep and run. The equivilant of 7 Marathons and a 10km race back to back with only 5 hours sleep over the whole race. A truely crazy adventure.

A last minute entry into The Lap Ultra Marathon, 47 Miles/ 75km, a route that circumnavigates Lake Windermere and traverses over several near by mountains, in the Lake District I did this Ultra Marathon a year ago as my first of my challenge and i enjoyed it so much I fancied another go.

A personal ambition of mine was to complete the West Highland Way. I managed to qualify to enter this Ultra Marathon so this one will be 95 Miles in under 36 hours along the west coast spine of Scotland.

After taking on the 190 Mile Northern Traverse in April I was left depserate to do another multiday race and I stumbled across the perfect race. King Offa's Ultra 185 Miles along the Offa's Dyke footpath from South to North wales with a time cap of 90 hours and 30,000 feet of ascent an epic challenge and I cant wait to get back at it.

Finally my last planned Ultra Marathon is the Montane Cheviot Goat Ultra Marathon 55 Miles/88km with a cut off of 24 hours. This may seem doable as it is one of the shortest, I have entered. But I chose this Ultra Marathon as it has the reputation of being one of the toughest in the UK. It is a self-navigated 24 hour slog around the Cheviot Hill in the middle of winter, mainly in the dark and alone with more elevation over that distance than anything I have done so far.

I need your support to get me through these huge events and help me raise funds for a really important foundation. I really want to hit my target before Christmas of 2021.

To make a donation please go to my Just Giving Page

Non runner to Ultra Runner See my story at https://www.facebook.com/CraigJonesUltraRunner/