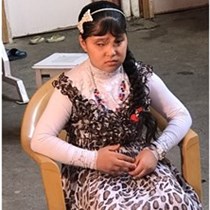 Weʼve raised £2,260 to to Help Maryam rebuild her life after an ISIS bullet hit her in the face a heartbreaking horror story from Mosul

Somehow, Maryam Samir survived the war in Mosul but there was a moment several months ago, when her father Ahmad left her for dead.
She was lying on the ground, covered in blood, after a sniper from ‘Islamic State’ had shot her in the head. The bullets were flying and her family were several hundred metres away from safety.
Still, Maryam’s mother told Ahmad to pick her up, despite the noise and the terror they felt. “You can’t leave her here,” she said. “Maryam is our daughter.”
But Maryam does not look like other 12 year olds. The gunman’s bullet sliced through her skull, then travelled through her right eye and both sides of her nose. Her face bears the marks of this savage act and her mind is consumed with uncertainty.
We first met Maryam in July at a badly overcrowded rehabilitation clinic. The hard-pressed physician had run out of just about everything he needed - and he could not help the girl with the disfigured face either. According to the rules, Maryam’s not eligible for treatment of financial support because she still has some vision in one eye. The work that is required will be performed by a highly experienced surgeon in Erbil in Iraqi Kurdistan, called Dr Jalal Fattah. He helped to stabilise Maryam’s condition in August by removing shrapnel lodged in her skull. However, Maryam and her family need assistance to travel to Erbil from Mosul – a journey that can be time consuming and dangerous. Her father is not working his taxi was blown up during the final battle for the city, the family would additionally benefit from assistance with accommodation costs while Maryam is being treated.
Any monies raised will be directed to professionals in Erbil who can provide her with psychological and educational support. Maryam has suffered from a deeply traumatic experience from which she will struggle to recover. On returning to school her classmates told her that she was unpleasant to look at. Fearful of teasing she stays at home.