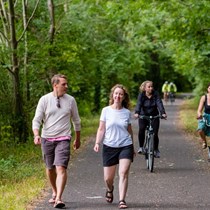 Weʼve raised £185 to fund a defibrillator for the Curry Rivel Village Hall.

The British Heart Foundation states that following a cardiac arrest every minute that passes without the casualty receiving CPR and defibrillation their chance of survival is reduced by 10%.

With an emergency response vehicle reaching 75% of life-threatening 999 calls within 8 minutes (www.nhs.co.uk) the time between a casualties suffering a cardiac arrest and the emergency services arriving means that the chances of survival rapidly reduce. Having a defibrillator on-site whether it be a workplace, school, university or any public building means that life-saving treatment can be given to a casualty immediately, therefore dramatically increasing the chances of survival from a cardiac arrest.

Defibrillators are a simple and effective method of administrating life-saving treatment to a casualty suffering from cardiac-arrest and can be used on both adults and children over the age of 1 years old. Defibrillators are extremely safe to use as they provide clear step-by-step instructions on how to use them and will only allow a defibrillation shock to be delivered to a casualty if one is required.

There is no doubting how vital defibrillators can be in saving-lives. Prompt delivery of defibrillation can result in survival rates as high as 75% (Resuscitation Council, UK). Having one close by could mean the difference between life and death.

The Village Hall Committee are making further improvements one of which is the siting of a defibrillator for the use of residents and users of the Hall. Curry Rivel Live 2018 is also supporting this cause through the sale of programmes.