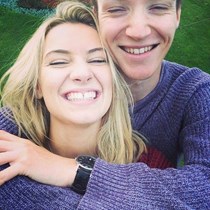 On Sunday 9th April, I am running the Brighton Marathon to help raise money for The Tom Wilson Memorial Fund Charitable Trust.
As many of you will already be aware, Tom was my wonderful boyfriend. He was inspiring and an overall incredible person, who touched many people with his selflessness, kindness, loyalty and charisma. He was a talented and committed hockey player, for the majority of his life: a sport and a family which he loved more than anything. Sadly, Tom lost his life playing the sport he adored in a tragic accident during a training session in early December 2015.
During that night two of Tom's team mates bravely performed CPR on Tom which, although unabled to save him, they were able to save his heart until the air ambulance arrived, which inevitably saved his organs. It was discovered that Tom had signed up for organ donation at Nottingham Trent University, during his first year, which took the decision out of his parents hands and they take comfort in the fact that this was Tom's will.
Tom is and will be forever greatly missed but he continues to inspire and impact the world, making myself and his family so incredibly proud by the fact that he has gone on to save and help so many people, through the gift of organ and tissue donation. Knowing this has provided hope and comfort for Tom's family and friends. Further to this, the help, support and advice from the Organ Donor Family Network has played an incredible part in Tom's family's life over the last year.
Tom was given an Order Of St John's Award for Organ Donation.
The Tom Wilson Memorial Fund Charitable Trust has been formed by Lisa, Tom's mum and sister Pippa, to help raise awareness of organ and tissue donation.
I would like to help promote and raise money for this increbile cause.
So please, if you would like to join me, I would greatly appreciate any support and in return I will attempt to be half the Athelete he was, whist trying not to embarrass him. Thank you!!