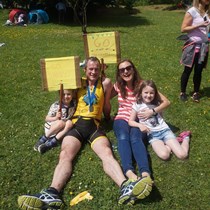 A few years ago I heard about a few guys doing open water swimming in the lake at Loughgall park. I liked the sound of this so I went along one night and soon realized that swimming was only part of the picture; the Armagh Pikekickers was Armagh's first Triathalon club and to be a fully fledged member I needed to learn how to cycle and run.

Roll forward three years and I am now preparing for the ultimate triathalon in Barcelona at the end of September; An Ironman! The Ironman starts with a 3.8Km swim, followed by a 180km bike ride and finishing off with a full marathon (Yes - all in one day!). There are 11 of us from the club taking on the challenge and we thought it would be a great opportunity to raise some funds for much needed causes.

In 2003 my cousin, Bernadette, left Ireland and headed to Nigeria to setup a primary school, providing life-changing education to children aged 4 to 11. On that first year there were 41 children and one teacher. Today the school has 917 students across 26 classes and employs about 50 staff.

Children who are lucky enough to attend the school learn to read, write, count and think. These few short years of education completely alters the options available to the children for the rest of their lives, and in turn, for the lives of their children.

Most Nigerian children however, are not fortunate enough to get this basic education. As teenagers, they 'graduate' from poorly run state schools unable to count to ten or to recognise letters of the alphabet. Career prospects are next to non-existent. To have any chance, they need the basic education that would typically be found in P1 - P3 of a western primary school.

And so, Bernadette's next goal is to set-up a Foundation class. A class where teenagers who have missed out on a meaningful education, get a second chance. When we think of making donations into 'Africa', there is often a perception that a sizable portion of the donation will be diverted into the non-core activities such as marketing and administration. But with Bernadette 'on the ground' running the school, we know that every penny donated (apart from Justgiving's 5%) will make its way directly to where it is needed. Any donations will be very gratefully received.

Oh and I'll let you know how I get on in Barcelona!