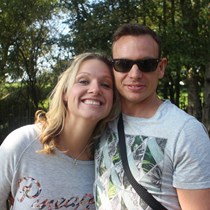 Weʼve raised £60,838 to help her husband's fight against a rare aggressive cancer and see his children grow up.

Apologies for not updating you all sooner, however the last few months have been particularly hard for my family and I..

I came home from Mexico feeling good, nearly pain free but unfortunately I gradually started to deteriorate and In October I was admitted to hospital with chronic pain and an infection. I had some radiotherapy to alleviate the pain that worked well but unfortunately I started getting more symptoms with the loss of feeling in my right arm and hand. I was admitted to hospital again last week and I’ve had another 5 radiotherapy sessions now to get all my pain and symptoms in order.

I had been refusing the treatment to give all the immunotherapy treatments time to work. Although my body has been showing great immune responses, unfortunately It has now been confirmed my cancer has progressed. This was something we as a family needed to process before sharing with everyone else.

On a positive note, in the midst all this, I received some results from a genetic test that confirmed 2 mutations. My oncologist in London has put me forward for a molecular trial which is very promising. Side effects are minimal and not harmful like Chemo or radiation.

I am also in regular contact with my consultant in Mexico. He is speaking with specialists in the US and beyond regarding other targeted treatments now we have the test results.

I am still following a very strict diet and hollistic protocol which has supported my body immensely throughout the last 2.5 years. I will go into more detail with this another time. If it wasn’t for the cancer I would be the healthiest I’ve been for years!

I just want to thank my lovely wife Emily for always being there for me. My parents, and family for their love and support and Ash for all your kind support and advice that you have given to me over the last few years which has been nothing short of incredible. Lastly thank you all for your continued love and support, D x

Damion is 38 years old and the most wonderful husband and father a wife could wish for. We have two beautiful girls together, aged 5 and 3 years, who adore their father. In August 2016, we were devastated to learn that Damion has an extremely rare pancreatic cancer called acinar cell carcinoma (of unknown primary). This extremely complex type of cancer is found in only 1-2% of patients with pancreatic cancer.

Although this type of cancer originated from the pancreas, the primary tumour has not been found, despite multiple scans, and it had spread to Damion's liver, ribs, pelvis and spine. To fight the aggressive nature of the cancer, in September 2016, Damion started a very intensive course of chemotherapy to control the disease. In November 2016, we were given the amazing news that the large tumour on the liver had shrunk by about 30% in response to the chemotherapy. In February 2017, Damion underwent surgery to remove half of his liver along with the large tumour, two smaller tumours and his gall bladder. The next scan showed no sign of disease anywhere within the abdominal areas and also that the bone areas were dormant.

Unfortunately, our world collapsed again after the latest scan results in September 2017. The bone areas are active again, and new tumours have also appeared in the spinal and rib areas and a suspect 1cm lesion was found on the liver. Damion is about to complete six more cycles of chemotherapy to get the disease under control. This type of chemotherapy, however, cannot be sustained in the long-term as it severely weakens the immune system, can cause other serious health problems, and increases the risk different cancers appearing due to the toxicity of the treatment. After this cycle of treatment is complete, the only option for Damion if he stays with the NHS is palliative care involving chemotherapy and radiation treatment. This will not address the underlying issues and the prognosis for this approach is very poor. Furthermore, the continued reliance on chemotherapy and radiation will not only increase the risk of other serious health problems but will also destroy the quality of Damion’s remaining life. .

To give Damion the best chance of a longer life in better health, he has been exploring other treatments and therapies offered at reputable clinics abroad. All of the clinics offer the latest cutting-edge treatments, which include immunotherapies, stem cell therapy, cryo-therapy, targeted chemotherapy, non-evasive radiation, regional and whole body hyperthermia, proton therapy and many others. Certain treatments available to Damion will depend on the outcome of genetic testing of his tumour tissue and on the funding raised. The cost of Damion's initial treatment is detailed below. We are aiming to raise around £52,000 in the first instance to cover the cost of genetically appropriate testing and the first cycle of treatment, which includes a 9 month after-care home treatment plan. Additional costs that could be incurred include bone scans, ultrasounds, surgeries, blood transfusions, x-rays and lab work.

Various fundraising events will be held throughout the year to help meet the target. I myself along with some of our friends will be running the Norwich half marathon and competing in various other events. Music events are also being planned with dj's and friends collaborating.

We see this as the best opportunity for Damion to live a longer life in better health and see his children grow up, and are extremely grateful for the ongoing support of friends and family and any donations kindly pledged to help. We are also extremely thankful for anyone else who is able to make any contribution, of any size, to help us undertake this vital treatment to prolong our wonderful husband and loving father's life

Thank you for reading, 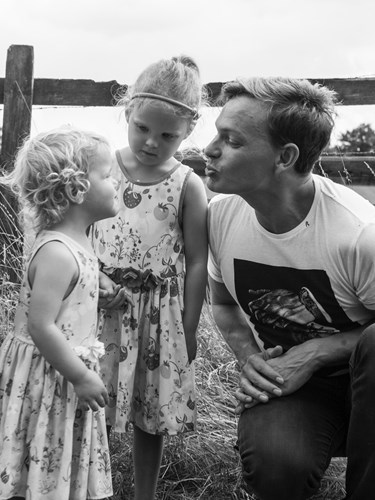