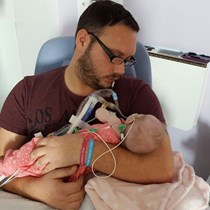 Weʼve raised £115 to I am aiming to raise as much as possible for James Paget Norwich nicu and the sick children trust addenbrooks. #eviesjourney

Evelyn Marie Herrington was born on the 03rd February 2016 at 00:40, weighing 6lb 6oz, in unexpectedly poor condition requiring immediate intervention with intubation at 50 minutes old due to respiratory distress. A chest x ray demonstrated a small right lung with an elevated right diaphragm were the reason she was unable to make the effort to breathe for herself. She also had upper limb weakness, causing her to have floppy wrists and reduced tone. In the 12 weeks that Evelyn was in NICU she had 2 lung collapses, 3 accidental extubations, one causing her to suffer Cardiorespiratory arrest (sudden stop of blood flow) where she had lack of oxygen for 15 minutes and was successfully resuscitated with CPR and Adrenaline, 3 failed extubations, one lasting an incredible 15.5 hours, pneumonia, suspected scoliosis, suspected sepsis, suspected NEC, 2 lumber punctures to test her spinal fluid and several very nasty infections. She was tested for H-type trachea-oesophageal fistula (abnormal connection with the oesophagus and the trachea) with a Bronchoscopy (small camera down her airway), had her muscles and nerves tested with an EMG  (Electromyography), dozens of x rays, had an NJ tube fitted directly into the lower part of her stomach as she couldn't swallow or keep food down, an MRI on her brain and spine which came back clear, an ultrasound on her heart (Echo) which was also perfect, Retinopathy eye test, hourly secretion removal and a muscle biopsy which brought to light a condition called Congenital Fibre Type Disproportion. CFTD is a condition linked to muscle weakness and wasting, poor muscle tone, scoliosis and breathing problems. There is currently no cure or treatment for this condition. Unfortunately this isn't Evelyns main diagnosis as it is still undiscovered. Evelyns condition is currently being researched by the Next Generation Children's Project which is part of the NIHR BIO-resource into rare diseases, which are doing their best to establish a diagnosis using genome sequencing. Despite everything she went through in her short 12 weeks and 1 day, Evelyn was always such a happy and smiley baby girl. 03.02.16 - 28.04.16.

My name's Daniel Herrington and I am Evelyn daddy. It would mean the world to me to raise a substantial amount to split between the causes named