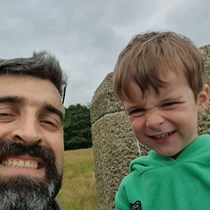 As a lot of my friends and family know, I had a worrisome time during the summer, ultimately ending with me being admitted to hospital, having collapsed whilst playing football. I remember very little from the incident, but have been told it was scary for all. I have to thank the guys i was playing with who administered first aid immediately, and called for the ambulance.

I was admitted into Brighton Hospital, where tests were conducted and they looked after me amazingly. Thank you to our NHS.

I have never been one to really talk about my feelings to anyone, but have learnt in the past few months how important it is to talk, and release the worries you may or may not realise you have. I have become very self-aware, and made a decision to cycle to work, since the October half term and have as of the 16th December completed over 500 miles. This is going to be a tough ride for everybody completing this event, but for me, there is an ulterior motive. I wish to raise 4500 pounds for medical equipment, mainly a defibrillator in a purpose built external box, which is secure for the pitch I was playing at.

All I am asking is for everybody who reads this to donate, not for me, but for the cause

I am a Buildings manager at a secondary school in West Sussex. I am a father to 2 wonderful young children, 7 and 3, who I adore more than anything. This summer has been tough, and I aim to be around for a few more years yet to enjoy and create memories with my little family.