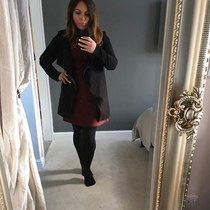 Things were looking bright; Nicky and her partner (Mark) were elated to find out they were expecting their much wanted 2nd child. Another little miracle, conceived via IVF. Their first IVF journey wasn't as straight forward so this was very welcomed news. They couldn't wait to tell Freya She would soon be a big sister.

Late 2017, Nicky had noticed a red mark on her breast. Feeling around the area, she also thought she could feel a small lump directly underneath; however wasn't overly concerned and put it down to being in early stages of pregnancy.

After a few months of no change, Nicky went to her GP to ask for advice. She was then referred to southmead for a ultrasound scan and was given the all clear.

As the issue still persisted, Nicky made follow up appointments to the GP and was put on antibiotics for a suspected infection. Still suffering with the discomfort, Nicky found it unbearable to even wear any under garments . The breast had now doubled in size and had a visable pitted (Orange peel) Appearance. More follow up appointments to the GP were made but at this point Nicky started to get concerned as her nipple had now started to invert.

Having had a clear scan prior, not thinking it was anything sinister, Nicky requested a 2nd opinion. With the birth of her baby pending, she worried of implications with breastfeeding.

After seeking more advice, Nicky was referred once again to Southmead. Thinking it was purely precautionary, Nicky attended the appointment on her own. It was during this appointment, a mass was found, aswell as several swollen lymph nodes. A biopsy from the nodes were taken first. Specialists then requested for a mammogram. Nicky was extremely worried as she was told X-Ray's could be dangerous in pregnancy but followed the request. Unfortunately the mammogram wasn't clear. A MRI was the next option.

A MRI was arranged. On the way home from the MRI scan, Nicky was involved in a car collision. Waiting at the crash- site, Nicky received the call from the doctor. They confirmed a lump was found on the MRI scan.

Nicky was faced with the unimaginable decision. Specialists wanted to act quick and commence chemotherapy but with very little research on the side effects during pregnancy, they could not guarentee what affects this could have for her unborn baby. follwing the specialist guidance, Nicky commenced chemotherapy promptly.

Chemotheraphy commenced 3 weeks after diagnosis and was administered 3-weekly initially. Alongside this treatment, baby was also scanned weekly to check growth and wellbeing.

Time passed quickly with regular blood tests, daily injections (to stop blood lots) and oncology appointments But Nicky took this all in her stride.

Specialsts kept a close eye on baby but explained a early delivery was imminent. Baby Leo was born via planned c-section at 34 weeks.

Baby Leo was in NICU but doing well with an anticipated leave date around his due date. However this little trooper surprised everyone. 7 days in NICU and 3 days on the ward with mummy, he was allowed home. Nicky and Mark were so excited to bring their new bundle of joy home.

2 weeks after Leo’s birth, Nicky had to commence her next stage of treatment. This was another type of chemotherapy, called paclitaxol. This Chemotheraphy would be administered weekly for 12 rounds.

Nicky is now on her 7th round. Her road ahead foresees surgery for full mastectomy and lymph node removal, followed by radiotherapy and hormonal treatment for the rest of her life.

The thing that amazes me with Nicky is her positivity. she is fighting this with all her might, taking every day as it comes and continues to be the bestest mummy to her gorgeous babies. I honestly don't know how she does it; I call her my 'bionic friend ' and that she is!

To add 'salt to the wound', she's also been made redundant (Found out 2 days after having Leo)

When I said i'd been working on setting up a funding page to help support her financially over this coming year and wanted her approval before I posted live, her response was 'isnt this selfish asking for help?'

This girl literally doesn't want to be a burden on anyone or ask for help and Thinks there's always someone else more deserving.

I personally Know how much of a struggle it is caring for a newborn and the financial impact it can have on your funds let alone doing all this alongside fighting cancer.

I'm hopeful to raise some money to help support this deserving family throughout this next year. With only one income coming into the household, strings are going to be tight. If we can help relieve this strain it will be one less thing to worry about and more time to focus on 'kicking cancers butt'

when I asked if there was anything she wanted me to add Nicky said 'ALL Macmillan forums have never come across inflammatory breast cancer whilst being pregnant and at my age. I have had no one to talk to. So anyone who has been diagnosed the same as me I would love to speak to and help x'

Nicky you're amazing! Please donate. Every little bit helps. Or if you cannot donate please share this story and spread awareness of inflammatory breast cancer In pregnancy.

Thank you from the bottom of my heart for taking the time to read Nicky's story.

Dear friends, my beautiful friend Nicky was diagnosed with inflammatory breast cancer in March this year. I'm aiming to raise awareness through sharing her story and hopeful to raise some funds to help Support her family through this challenging time.