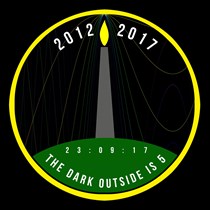 Weʼve raised £130 to help pay for artists travel costs for choosing to turn up and perform over the radio at The Dark Outside. And the merch that people ask for

This September marks the 5th birthday of The Dark Outside, A site specific 24 hour radio broadcast of music you've never heard before in a place where nobody might be listening.

Whereas we've always managed to get the funding to cover the radio license and the events at Sanctuary which accompany the broadcast, this year saw Dumfries and Galloway Council pull their funding for almost all free events and reducing the funding allocation to those events which are ticketed. http://www.bbc.co.uk/news/uk-scotland-south-scotland-39181793
So with this year being the 5th birthday it seemed right to try do something to celebrate.
2014 saw live performances from :zoviet*france: from the top of Big Doon, the hill where Murrays Monument and the Dark Outside transmitter are, Drokk (Ivor Novello award winners Ben Salisbury and Geoff Barrow) performed for 10 minutes in a field swarming with bats, The Broken 20 record label improvised for several hours accompanied by anyone willing to join in and John from Fini Tribe premiered new material.
Since then people have asked if they could play live, bearing in mind there are no pa systems and it's not a music festival but something about the location in the Galloway Forest Dark Skies Park made them willing to play.
We'd like to be able to cover the travel costs ( it's kind of in the middle of nowhere ) for people willing to perform. We can't compete with the festival circuit and pay booking agents fees but want to at least pay for travel expenses. So with that, if you can help out with whatever amount you can then we will be eternally grateful.
A lot of people have asked throughout all the broadcasts if any merchandise was available and that they'd happily pay. From the NASA styled Mission Patch logos to t-shirts and someone wanted a mug (!) We'd like to do that and sell them at cost.
Every penny raised will go into making this year's broadcast a memorable one ( hopefully for all the right reasons)
Thank you