Rochdale
In memory
Funded on Saturday, 29th May 2021

David Clough died on the 24th June 2020. He was a lifelong supporter of Rochdale AFC and raised over £400,000 for the club collecting their weekly lottery and selling scratch cards in his village of Littleborough. David never drove and raised this money walking the streets and riding around on his bike. He preached 'The Dale' to thousands of people on a weekly basis and was a popular figure no matter where he rode his bike.

Upon his death, David left his estate to be spent 'for the benefit of the supporters' of RAFC and the first project in his name has been the purchase of an electronic scoreboard at The Crown Oil Arena. Every project that is undertaken will benefit the club's fans, and to repay this unbelievable gesture, they are fundraising to commission a statue of David and place it upon his seat in The Main Stand where he had a season-ticket for many years. It is a fitting tribute to Rochdale's Superfan.

The idea was taken from Spanish side Valencia, who did something similar for a supporter of their club. The club commissioned a bronze statue of fan Vicente Navarro Aparicio (see below) at their Mestalla Ground after he devoted his life to the club and still watched matches despite losing his sight. 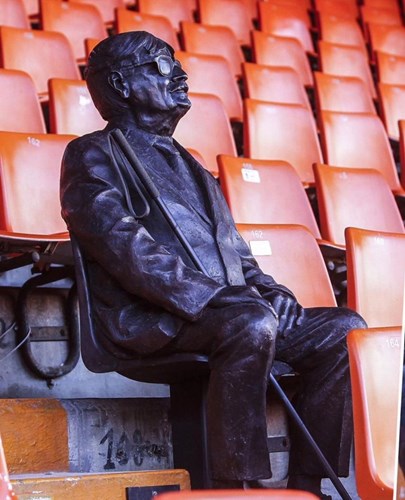 The more that is raised, the better the statue that can be placed upon Cloughie's seat and allow a true club legend to have a permanent presence at the stadium. We set an initial target of £2,500, which was increased to £5,000 (on Friday 29th Jan) after just a few hours of the appeal going live due to the level of donations being received. The target was increased again on 1st February to £10,000 and will remain at this level now until the campaign finishes. If football fans we can help us exceed this new target, the quality of the statue will enable fans to pay a lasting tribute to a Dale Legend.

This fundraiser is being driven by football fans for a diehard football fan. Any contribution is welcome for a man who devoted his life to Rochdale AFC and whose unbelievable gesture after passing away, will be of benefit to any visitor to the club's ground.