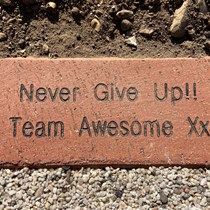 Weʼve raised £7,180 to help fund the purchase of specialist equipment to aid with Maisie's rehabilitation

Our beautiful 10 year old daughter Maisie was diagnosed with a brain tumour in January 2016 - in February she underwent surgery at Addenbrookes to remove as much of the tumour as possible, 80% was successfully removed. Unfortunately following her surgery her little body gave in and she developed a collapsed lung which meant she was admitted to PICU and put into a coma to allow her body time to heal. It was almost as if her body shut down completely and did only what was needed to stay alive which sadly did not involve moving. She then underwent a further operation for a tracheostomy to let her lungs recover. When Maisie came round sadly, she was unable to move her body and following some tests it showed that there were no signals from her brain to her limbs, however, over the last few months it's almost as if someone has pressed a reset button......she is slowly but gradually regaining the use of her body but this is not only going to take time but also some serious rehabilition and intense physiotherapy. Since the beginning of our journey we have discovered that the cost of any specialist equipment is astronomical but we don't want her rehabilitation to suffer, hence setting up this page. We are still in Addenbrookes, Maisie's strength, determination and smile keep us going every day. We are heading towards a home discharge later this year and want to make sure we have everything in place for when we finally go home. We would be truly grateful of whatever we can raise towards buying the equipment she needs to help with her recovery and to get her back on her feet again!!! Thank you for your donation whatever the amount, from the honorary members of Team Awesome!!!

We are Maisie's parents, Dawn & Darrell and we have the most amazing daughter 💖 Our world was turned upside down when Maisie was diagnosed with her tumour in January 2016 - but we know that together we will get through this and raise awareness to others along the way xx