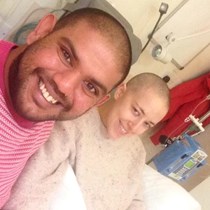 Weʼve raised £13,250 to Save Deborah from terminal cancer

Our dearest, darling Deborah /Debbie /Debs was diagnosed with stage 2B cervical cancer in September 2016 aged 31 years old. Prior to commencing cancer treatment - which would leave her completely infertile - she undertook the fertility processing with her fiancé Fraz and they successfully managed to freeze 4 embryos!

Debbie bravely endured a brutal chemotherapy regime from November until January 2017 which resulted in loss of hair hair and suffering from the many ill effects of this toxic treatment. This was followed by an intensive six-week radio-chemotherapy regime whereby she was required to complete chemotherapy on Monday and received daily radiotherapy - only a matter of weeks after the previous chemotherapy regime ended. Finally, Deborah had two treatments of Brachytherapy (internal radiotherapy) in March involving overnight stays in hospital.

Deborah received the results of her treatment in March this year. Unfortunately not only have the treatments been unsuccessful in addressing the existing cancer in one area in her lower lymph nodes, but the disease has spread to her spine. Deborah was discharged from hospital, considered ‘terminally ill’, and advised that her condition is no longer treatable. Mainstream medicines are no an option, on the basis that ‘there is no cure’.

This is devastating news for us all. Deborah has her whole life ahead of her, she plans to marry her fiancé Fraz in the summer and they still hope of one day becoming parents. Understandably friends and family are simply unwilling to accept at this stage there is nothing more that can be done.
Collectively we have been researching other options including alternative therapies in the hope that we can cure Debbie.

Deborah is now receiving alternative therapies however we can’t afford to pursue this without donations to help support the costs. Her progress will be monitored by NHS health professionals.

Please donate what ever you can, it is deeply appreciated.