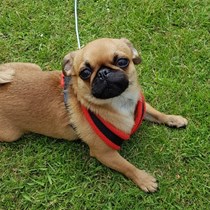 I got little Alvin at 8 weeks old, he has had problems with his urine, he has been in and out of the vets, on numerous antibiotics, also had a scan to no avail, we just could not find what was causing his continuous urine infections. In January while he was in the vets to be spayed I asked for an xray to be done, and lo and behold the vet found the biggest stone I never thought possible, it was the size of a 5 pence piece, we'd cracked it, the vet and I were over the moon finally. Alvin did really well from January when the stone was removed and sent off for testing, results came back and it was a urate stone apparently very rare in a little dog just weighing 2.4kg i was adviced to not feed him meat protein at all. So Alvin was put on a fish and veg diet straight away which he loves. He was doing really well no problems at all until last week when all of a sudden he couldn't pass urine at all, I rushed him to the vets who placed a cathater in and emptied his bladder, he has since had bloods test done to test for a Liver Shunt. The results are back and it's not good news my little man has a liver shunt. I'm devastated, I could kick myself for not insuring him when I got him, but it's to late now. Alvins medical expenses are going to be in the region of 3300 if not more, any help is much appreciated no matter how small. Thankyou in advance and ill keep you all updated of his progress. Karen