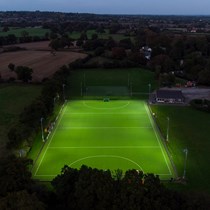 Deeside Ramblers Hockey Club is raising funds by hosting a Dawn to Dusk Hockey match. On Saturday 21st May 2022 a core group of members will play hockey from 5am until 9pm a huge undertaking. They will be supported over the day by other groups from under 8s, senior teams to walking hockey members. A truly club wide endeavour.

The funds raised will be split between Alder Hey children's hospital oncology department and the clubs own floodlight fundraising appeal.

We pride ourselves for being a family hockey club and upon hearing that Max one of our players children was undergoing lifesaving treatment at Alder Hey we wanted to give our support, in the best way we know how, playing hockey!

At the same time we have undergone improvement work at the club in the way of new floodlights, future proofing National League standard hockey at Deeside. We are on a mission to raise £25,000 to pay for them.

All proceeds will be split between the two causes, and we hope you can support us in any small way possible.

A little update on Max:

So we found out that my amazing son Max got diagnosed with bilateral Wilms tumours (which is quite rare) back in December 2021 - on his 2nd birthday of all days. Max has had a bit of a bumpy road since then. He had his first dose of chemotherapy within a week of finding out (incredible the amount of talented NHS people he managed to pull together in such a short period of time) then numerous trips in and out of hospital with high temps including Christmas Day with a temp of 40!

About 3 weeks after his first does he suffered a very rare, serious reaction to one of the chemo drugs which started to shut down his liver and he ballooned with fluid retention, (looked like a pregnant woman) - we had a tough week in HDU and a further 2 weeks on the ward for recovery.

After that episode of being laid up for 3wks he lost all muscle mass in his legs and he had to re-learn how to walk. After a change to his chemo regime (every 3 weeks) he started to bounce back to being a happy chappy and that brought us all the way to the operation day on the 17th March.

The op day: he was in surgery for 9hrs! Along with the tumours they removed his right kidney and 2thirds of his left one that’s right only 1 third left, with a little stint down on ICU then back on to the ward for the rest of his recovery. So far his little kidney is doing a remarkable job, amazingly he only spent a total of 9 days recovering in Alder Hey - we were out the night before Mother’s Day. He had a chilled Sunday but that was met with a high temp on Sunday night so back to hospital we went and have been in since then to recover and for his first dose of post op chemo. We’ve still got a long, tough road ahead but ‘hopefully’ on the right path to recovery.

So to all those budding ramblers and friends please make sure you get down to the club to make the day a special one to remember, and hopefully raise some more money for Alder Hey and to future proofing the Ramblers Hockey Club for generations to come.

Lots of love and hugs Max, Sara and Andy xxxx