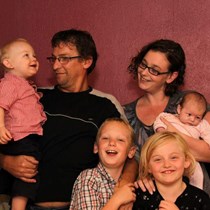 This is Terry, Hayley and their four beautiful children.
About 6 years ago they received the devastating news that Hayley had cervical cancer after the birth of their 4th child. Hayley went through chemo and radiation therapy, things were looking up until they found she had suffered from radiation damage to her major organs, causing all kinds of complications. Hayley underwent various and major operations to help fix this, unfortunately a cyst had developed and ruptured causing septicemia.
She spent 18 weeks in the intensive care unit, she had to have a trachea fitted, her only way of communicating was with pen and paper or cheeky winks back at Terry when he said "I love you". Hayley took a turn for the worse, doctors weren't hopeful and they told Terry and the kids to say their last goodbyes, a heart stopping moment they'd dreaded to hear.
Amazingly, the very next day Hayley woke up, probably just to prove how much of fighter she is.
Hayley was in and out of hospital and with all of the operations she eventually had to be tube fed. Rebecca, her oldest daughter done her best to help with the day to day care and looking after her. Even in hospital Hayley would fight to still be with her children, she insisted they went on holiday together despite her condition.
The septicemia caused her condition to deteriorate further, her organs were failing on her, the doctors had no choice but to amputate her left leg.
Hayley's leg had still yet to heal, it was around two months ago she had an MRI scan giving her and her family the fantastic news that she was clear of cancer.
Their celebrations were short lived as just a few weeks ago Hayley was told her condition was terminal. On the 30th of April Hayley passed away.
Terry and his children need all the support they can get right now, this money will help towards a magnificent and colorful funeral that Hayley so would have wanted.
Thank you for reading and any donations will be appreciated wholeheartedly.