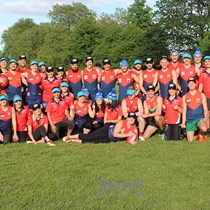 'Fight MND', is a 100% non for profit Australian charity with the focus of raising funds to build awareness and researching Motor Neurone Disease (MND) with the overall aim to find a cure.

Former Aussie Rules player and coach, Neale Daniher was diagnosed with MND in 2014. A former Demon, Gabby Duncan knows Neale and his family on a personal level, during her time in London in 2016, Gabby spoke to the Demons about MND and 'Fight MND' charity. At the time the Demons did not have a chosen charity and with several of our players also having friends and relatives past and present with MND, we decided to help in the fight against MND by dedicating a round each year for fundraising, with 100% proceeds going towards 'Fight MND'.

Neale's close ties with Aussie Rules impacts the charity and the morals and values link closely with those of the Wandsworth Demons. In an Aussie Rules game you play as a team, your teammates know what you do and how you do it, being selfless, working together and fighting for a shared outcome is both what 'Fight MND' is about and what we are about at The Wandsworth Demons.

‘The big Freeze at the G’ is an event held in Melbourne over Queens Birthday Weekend at the MCG before an annual clash between Melbourne Demons and Collingwood Magpies.

The Wandsworth Demons host their own take of this as ‘The big Freeze at the C’ where The Wandsworth Demons hold an annual fundraiser day and a home game of Aussie Rules in London, all proceeds raised go towards 'Fight MND'. The Australian government doubles our funds raised, in 2017 we raised a total of $12000 for the charity and want to reach or smash this each year!

This year 'Big Freeze at the C' will be held on June, 9th on Clapham Common! With a big raffle, ice dunking and Auskick matches it's a day not to be missed!

Donate now to stand with us in the fight against MND!

The Wandsworth Demons are a volunteer run Australian Rules Football club who play in the AFL London competition. They are a founding member of the league and have been based at Clapham Common in south London since 1990.