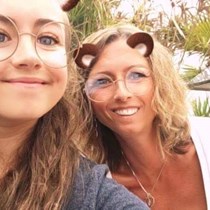 Sumner Malik, one of a triplet and one of the brightest and bubbliest young squash players alive, has been diagnosed with a Diffuse Intrinsic Pontine Glioma (DIPG). DIPG is a terminal, paediatric form of brain tumour.

There are only 40 cases of DIPG diagnosed a year in the UK but every one of those is a tragedy with no confirmed cure and a non-existent survival rate.

There is hope out there though with lots of doctors and hospitals around the world carrying out pioneering research into ways of treating this disease, with a few offering cutting edge treatments on compassionate grounds. These treatments though are unfortunately very expensive and every bit of help is needed to meet the costs.

I’m Diane and I have known Cameron since we went to Sea Cadets many years ago!!! It was at Sea Cadets that I learnt to row. When I moved to Wales 5 ½ years ago we joined the local yacht club and found out that they had a Rowing section, happy days. We row in Celtic Long boats and complete in the Welsh Sea Rowing Association League. We also completed in long distance races.

On Saturday 8th September 2018, We have a team going to London to do The Great River Race, a 21.6 Miles from London Docklands to Ham in Surrey. A spectacular boat race up the River Thames, it attracts over 330 crews from all over the globe.

This year I have decided to do it to help raise money to help Sumner and his family.