Weʼve raised £2,150 to aid the RNIB (Royal National Institute for the Blind) in memory of James Harrison

Myself and Kelly are both running the London Marathon 2020 on the 26th April 2020 for TEAM RNIB and are raising money in aid of the RNIB. All monies raised will go directly to the RNIB In memory of James Harrison. James died on the 1st August 2019 because of an extremely rare and extremely aggressive auto immune disease called Macrophage Activation Syndrome coupled with Adult Onset Still’s disease. The disease attacked all of James‘ organs, the first organ it attacked was James’ eyes and James was diagnosed blind, the disease went on to shutdown James’ kidneys and then began attacking his brain, lungs and heart. James was due to get married on 03/07/2020 to Kelly, they both had 2 beautiful young children together; a 1 year old boy called Noah and a 2 year old girl called Imogen who has since turned 3.

Imagine being told you’d never see your beautiful wife to be again, you wouldn’t see her in her wedding dress walking up the aisle towards you, you wouldn’t see your two babies faces again. All of these realisations James was faced with yet James was the most positive of all of us in his plight. James would say, ”I want to do as much charity stuff as possible when I get out of here, I won’t let this define me!” So we have thrown ourselves in at the deep end and gone for the big one, running a marathon seems such a small thing for us to do when compared to the fight and strength James had in hospital, the daily battles he took on words simply can’t explain.

Watch my journey as I go from 100kg couch potato who hasn’t ran for 17 years to a Marathon runner in a little over 250 days. Follow me on instagram and keep up to date with my daily vlog... @couch_to_marathon_

We plan on doing several runs in preparation for the big one, 5K’s, 10K’s, Half Marathons etc. Training is well underway

Thank You for taking the time to read our story and our cause and please please please, donate as much as you can. A great cause for a legend of a human being, my brother, James Harrison 💙 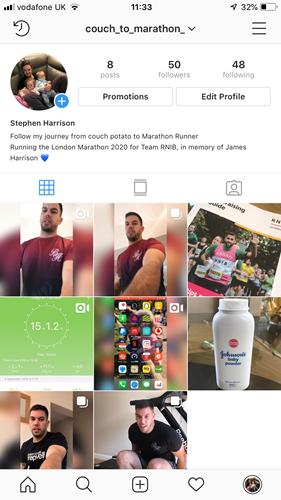