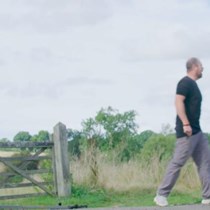 DONATE tells the story of Mickey's life saving transplant, the oversized plastic kidney he builds to raise funds, and the mind blowing journey that leads him to his donor.

DONATE will make you laugh, cry, and think about organ donation.DONATE is a film that you have to see, for the simple reason that it’s about you, your loved ones, your mates…everyone.

DONATE is about the squelchy bits floating around inside all of us - the bits which keep you…... or maybe someone else, alive.DONATE is a film which you can be part of. Donate to…DONATE and get your name, your face and even your performance on the screen.

Donate to DONATE and help us to produce a film which raises money, awareness, a smile…and hope. We will make DONATE as successful as possible, but no matter how successful it becomes, the producers will take no profit. All profits from DONATE will be donated to life saving clinical research.

Head to DONATE The Movie website to watch the trailer in full!

In order to get DONATE onto the screen, raising awareness and earning money for valuable research, we need you. Of course that’s not strictly true ….we actually just need your cash, but we would quite like you to join us for the ride, if you fancy it!

To produce DONATE….The Movie, we need to raise £200,000. Every penny and pound you give will go directly into covering production costs - Locations, equipment, legal fees, payments to actors and crew who need a living wage whilst they work with us. Any money that is raised above the £200,000 figure will be donated directly to research and support charities helping transplant patients and donor families. We will report back to our supporters via social media telling you just where that money has gone.

Our aim is to secure wide distribution for DONATE …The Movie. Our ambition is for the film to earn money for research, whilst also raising awareness, and a few smiles.

Now you might say…’Couldn’t I just give my money to support clinical research?’…and of course you could. That would be a wonderful thing BUT if you give some of your money to DONATE The Movie, you will be supporting a film about organ donation, made by a team who have benefited from organ donation, designed to tell the rest of the world about the benefits of organ donation, whilst also earning money which will be used to support organ donation and research. We hope you agree that’s worth a few of your valuable quids.

WHAT DONATE WILL GIVE TO YOU IF YOU GIVE TO DONATE

£500 is a lot of money …but hey £5 is also a lot of money. Whatever you can give to DONATE…The Movie, will make a difference, and will also ensure that your name appears in the credits at the end of the film.Wanna get into movies - give us your loose change….or bundle it up, we don’t mind!

£500 or more, guarantees that you get your truly astonishing face on the screen.There are a number of crowd sequences scheduled for DONATE …The Movie, and anyone donating £500 or more will be invited onto set and will feature in these scenes.

If you are able to donate £1,000 or more, then quite frankly you are on your way to Hollywood! You will be offered a speaking role in a sequence featuring Mickey and his supporters.You will be invited onto set, to work with the director on your speaking role.

Now it’s just possible that none of the options outlined above are enough for you. Perhaps you wish to donate a truly huge amount of money. In which case…yes please!

Alternatively perhaps you can give something other than cash - equipment, your expertise, your time or five thousand tea bags for use during location shooting. Whatever you can give which you think would help us to produce DONATE…The Movie then we would love to hear from you. Please provide your details in the form below, and we will Get back to you….very quickly!

Meet The People Behind The Film

​DONATE the movie is inspired by the experiences of three million people in the UK who live with the catastrophic consequences of Chronic Kidney Disease. Many, like the creator of DONATE, rely on dialysis to keep them alive, whilst waiting and hoping for an unknown saviour to DONATE a suitable organ.

Some, like the creator of DONATE have their hopes and prayers answered. Not everyone is this fortunate.Kidney disease will never be a happy or uplifting topic, but sufferers do laugh, joke, enjoy life as best they can, and with help, make films.​

Andrew worked variously as production manager, producer and director on some of the UK’s most successful television entertainment and comedy productions.Principal credits include, Only Fools and Horses, Victoria Wood on TV, Alas Smith and Jones, Butterflies, Blackadder, Comic Relief, and many more.In 2005 Andrew became Course Leader for the UK’s first undergraduate degree programme in Film Production and Cinematography. In 2017 Andrew received a life saving kidney transplant….and began to think, ‘ this could become a movie!’.

Sue has worked as an Art Director on some of the UK’s most successful television drama, entertainment and comedy productions. Principal credits include Downton Abbey, Eastenders, Blue Peter, Dr Who, House of Cards, House of Elliot, A Song For Jenny, The Dresser, Bread, Sleepers and many more.

Camille graduated from CSM in 2017 and ran away with the circus! For the last three years Camille has worked with Giffords Circus, bringing live entertainment to Oxfordshire and the West Country. Selling pop-corn, managing troupes of performing horses, and putting up the biggest and best of Big Tops,

Camille continues to work as an artist, as well as recently setting up an online artisan food business. Having witnessed Andrew's struggle with Kidney disease, Camille agreed to take on the role of masterminding the online campaign for producing DONATE. ​

DONATE has been supported thus far by a talented cast and crew. Harrison Abel is an exciting young talent who lights up the screen, whilst Dominic Kinnaird is a hugely experienced actor with credits ranging from Casualty and Doctors to WonderWoman. Danny McGregor's cinematography captures the key relationship between Mickey and Raoul which lies at the heart of the film.

IF YOU HAVE ANY QUESTIONS ABOUT DONATE, OR WOULD LIKE TO KNOW MORE, PLEASE FILL OUT THE ENQUIRY FORM BELOW. YOU CAN ALSO E-MAIL DONATETHEMOVIE@HOTMAIL.COM, WE WOULD REALLY LOVE TO HEAR FROM YOU. KEEP UP TO DATE WITH DONATE'S PROCESS ON OUR INSTAGRAM AS WELL. FOLLOW donate_themovie.

THANK YOU ENDLESSLY FOR YOUR SUPPORT, WITH THIS LIFE CHANGING AND MORE IMPORTANTLY LIFE SAVING PROJECT!

The money will be used to make a live saving and life changing film about organ donation. DONATE is a movie inspired by true events, and the people making the film have gone through organ donation. Read our story to find out more and find out why we need you!