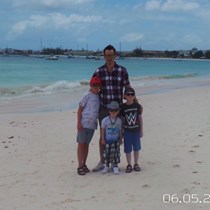 Weʼre raising £1,850 to To help fund Fred our beloved 6 month old kittens vet bill after being shot by an air rifle.He has a broken femur and a pellet lodged inside

Our beautiful soft grey velvety kitten Fred, who is only 6 months old, was sadly shot with an air rifle on Saturday evening. He hadn’t come home Saturday night.

We were away, and my parents were feeding him and his sister. They saw them in the morning and gave them breakfast, and as usual as soon as he’s done, after a little fuss, he is out to play. That evening he did not come home. Which is most unlike Fred. He is usually pretty quick coming home for his dinner.

They looked around and called him, but to no avail. They then went back at about 20:00 and searched the area for him again. For about an hour or so, but still no sign of him.

My Dad then went back out to ours to search again at 22:00 that night. Searching again with his torch and treats in hand, but still no Fred. Plenty of other cats and foxes, eyes shinning bright in the torch light, but no Fred.

That following morning, my husband got in the car as soon as we knew he still hadn’t come home. After a long and stressful night of worrying about little Fred. I had to stay with our children, but we all wanted to come straight home and help look for our beautiful little boy.

When he got back home he thankfully found him. Sunday morning. Hiding, scared and badly injured on top of our brick shed. He is 6ft5 and had to climb right on top to get him down. He was not interested in treats, his favourite thing, and was very quiet, scared and injured bless his heart. Dan could see that he had an injured back leg as he couldn’t walk on it, and was obviously in pain. Totally heart breaking to see our Fred like that.

He took him straight to the vets, who later investigated his injuries and with a quick X-ray, without sedation, late that day, they could see it was from an air rifle pellet.

We then had to wait overnight again for them to be able to do full X-ray’s under sedation to get a better view of his injuries.

With those then done, they phoned me at 21:30 that night to say that he had a broken femur, either from the pellet or from a fall after the shooting! And the pellet is still lodged inside him next to his bladder. They said it is possibly safer to leave the pellet in as it very luckily has not damaged his insides. They are planning to pin his leg to repair it. Or they will have to amputate his leg.

They then said that we would need to pay up front for the operation. And do not offer a payment plan. And we had not completed the insurance for him.

We have to pay £1850 the day of the surgery. Which I do not have instantly.

It’s been a horrid weekend waiting to see how much damage it has caused. we won’t know fully until they operate on Tuesday. All this is not fully clear till they operate. Which they won’t do without payment.

This had been an awful shock to us all. And not only that, we have his little sister at home missing him terribly. Like we all are😢

We now have a huge bill to pay, which I have literally just been told how much they want at 21:30 at night. And they need it all in the next day, so they can go ahead to operate.

All of this because some stupid person feels the need to shoot at animals using an air rifle!

They should not be able to use an air rifle in a residential area. This is totally disgusting and completely heart breaking for us all. And very frightening for all our neighbours with cats and other pets, worrying some idiot is shooting them.

We now have a poor injured cat, a family missing him and heart broken and a huge bill to pay.

Feel free rifle shooter to come forward and put your hand in your pocket!

And a massive thank you to anybody willing to help. Much love ❤️