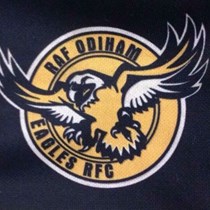 As Royal Air Force servicemen and also having a passion for rugby, we naturally share a camaraderie both on and off the field. So when 11 of us from RAF Odiham Eagles RFC decided that we would like to partake in the Reading Half Marathon in March 2019, it gave us the opportunity to help raise money for one of our teammates and his family as well as for our rugby club.

At just a few months old, our teammate’s son, Enzo was diagnosed with cerebral palsy. Enzo, who is now almost 6 years old, struggles to hold his head up without support, sit up by himself, roll, crawl and even stand. He is unable to eat by himself and has to rely on being fed via a tube and has not yet developed much speech.

The damage on Enzo's brain means he is unable to process the signals that his brain is sending to his body, hence his lack of mobility. Stem cell treatment is a way of repairing and replacing these damaged cells and would allow his parents to work with him to help strengthen his muscles and encourage his brain to co-ordinate with the rest of his body.

In the long run we hope that the treatment will offer Enzo a better quality of life and the chance to become independent.

Using a fraction of the money raised, we’re hoping to finish this coming season with the chance to participate in a rugby tournament, giving us the opportunity to develop as a team and hopefully celebrate a successful season.