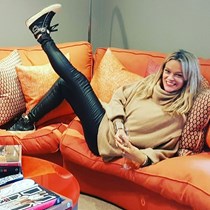 Eddy Amoo was an inspirational musician and artist with The Chants and The Real Thing. His legacy is to give other young people from all walks of life the opportunity to find the same joy in music that he did."

Eddy died on 23 February 2018. Eddy was a showman, a songwriter, and a legend in British music with Liverpudlian band The Real Thing.

The band, along with his brother Chris Amoo and friend Dave Smith, formed in the 1970s and have been performing and touring ever since.

Eddy will be remembered for The Real Thing's hit singles You To Me Are Everything, Feel the Force, and Can't Get By Without You, as well as his energetic performances and political commentary with songs such as Children of the Ghetto.

Eddy leaves behind a large and loving family, a community he adored in Toxteth, Liverpool and his beloved music and band, The Real Thing.

Eddy will long be remembered as a tour de force in British music and he will be sorely missed.

This Just Giving page has been set up in his memory to raise fund for aspiring artists, much like he was in his youth in Liverpool. The family asks that no flowers are given, but instead donations made to this cause.