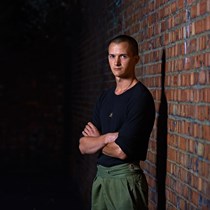 Mr Rostami, 32, fled Iran in 2005. His father, a member of the Kurdish Democratic Party, had been murdered in 1991 and his life was also at risk.

The Home Office refused his application for asylum and have been trying to send Mr Rostami back to Iran since. Rather than offering him sanctuary they sent him to a detention facility for 34 months.

“If I go to Iran I will be tortured then murdered, I'm a radical atheist, I'm an advocate of atheism, a student of Richard Dawkins and Christopher Hitchens as well,” says Mr Rostami.

After over a decade of abuse and persecution at the hands of the Home Office, this year Mr Rostami finally snapped. In February he spent £7.29 of this £35 per week allowance on eggs and went to express his anger and frustration. "Criminals!" he shouted, while pelting the building.

And yet it was Mr Rostami who faced prosecution. Westminster Magistrates' Court recently found him guilty of criminal damage and threatening behaviour and issued him with a fine of £405.37.

Pelting the Home Office with eggs is not something anyone should be penalised for.

The detention and mistreatment of migrants in the UK is a matter of national shame.

Feridon Rostami is a hero.

Let's pay off his fine and reimburse him for the eggs too.

Any funds raised in excess of the target will be donated to Refuge, a charity of Mr Rostami's choice.

"Government cannot cut up the link of human bounds and have the last laugh." Feridon Rostami, 2016.