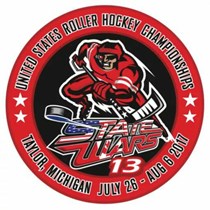 A young girl from Wigan has been chosen to represent TEAM UK in the largest inline roller hockey tournament in the USA and one of the largest in the WORLD.
Ellie will also be the first female under 12s Netminder in England to play in the tournament,
This is only her 3rd season as Netminder and has already achieved so much,
by the end of only her second season Ellie was chosen as to play in the British Inline Puck Hockey Associations (BIPHA) league's superleague tournament representing BIPHA central (central England) and also chosen as the league's dream team Netminder.
This season Ellie has also been playing in the elite ladies roller hockey league and has had a fantastic start against some of the best women in the country!
Ellie currently plays for the Glossopdale Devils and makes a 3hr round trip over to Rotherham each game day,
Training however is a little closer to home at Atherton roller rink.
Ellies goalie coaches Gary holding and more recently Steve Wilcox have both played a big part in Ellie's success just as much as her team coach Malcolm Tilly who Ellie has played for since her debut game and has encouraged her at every stage of her progress
This is a tremendous achievement for Ellie as over 80 people trialled for a place on the team and it is an honour for all of the successful players to be part of British Inline Hockey history.
What Ellie has achieved in a relatively short space of time is proof that hard work does pay off. Ellie and I owe a great deal of thanks to the coaching staff behind her!
Ellie is currently looking for sponsors to help her achieve her dream of playing against the best that the 52 states of the USA can throw at her.
As with all minority sports, these trips have to be self funded and any help with the costs will be gratefully received.

Thank you so much for taking the time to read this and hopefully you will be able to help in some way help to fund this trip for Ellie to make history.

What Ellie has achieved in such a short space of time is inspiring, she trains hard at a high level, she is currently training/playing 5 days out of 7. Tuesday nights she trains with the seniors and at just 13 I find that very inspiring!