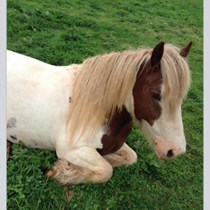 Weʼve raised £85 to please help us build sunny a paddock

Sunny has been part of our family since he was a youngster ,he is a amazing pony with huge character and has helped me through yrsrs of depression ,now I have to help him he was diagnosed with laminitis ....xrays showed slight rotation and dipping but nothing fatal ,,he has been on box rest for 4 weeks in a comfy stable with a deep bed of shavings,,since being in his stable its been a constant battle ..he has had a infection which was treated with antibiotics unfortunately these caused him to get colitinitis with very bad dioreah ,he's had many different pain killers and supplements and now resulted to being put on patecetamol after failing with the danillon and metacam also he has a odema he's had special heart bar shoes fitted to support his feet but is off his food and has been really depressed ,I've spent many nights sleeping in stable with him just to keep him company but ideally I'd.like.to build him a paddock from.wood at the back of.my house where he can be free to move about and see his friends and not be shut away .he.stands in the corner sometimes facing the wall and it breaks my heart watching him ..after paying large vet bills which I'm still paying off I just can't afford to do it for him and was hoping even if everyone gave just a few.pound to help him we would be forever great full ...he I'd insured however the insurance company.won't cover anything to do.with his feet as he.is exempt due.to previous foot abcess ..its costing me a fortune and the last thing I want to do is.give up.on him I want to see him happy and eating and starting to recover ..please help.me build his.pen ..this could.be either a.donation of strong wooden fence posts..wood.chip..sand..any building.material.or.tradesmen willing to help.with making it secure for.me.or.a.money donation ..I.will.be putting.updated up.regularly and keeping everyone up to.date on his.progress .