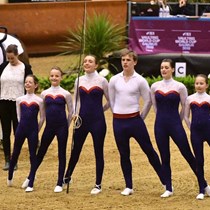 Weʼve raised £4,285 to put towards the purchase of and secure a new team horse for our vaulting club.

My name is Julie Newell, founder and Head Coach of the English Vaulting Squad for the past 19 years. During this time our squads have represented Great Britain for 10 of those years at championships and 18 years with individuals. This year in particular has been an incredible journey with many highs as well as a few lows.

Following the World Equestrian Games last year and several of our squad members retiring, we put together a new, relatively young and inexperienced team with our existing horse Harry. Through shear determination, dedication and love of the sport they exceeded all expectations and gained a qualifying score at their first international together in Saumur, despite only being together for a few months. This allowed them to be selected to represent Great Britain at the European championships in Holland.

This year I also decided to hand over the lunging of our team to Suzi Cusick, a former vaulter, squad member and now a dedicated coach here at EVS. Suzi, the team and Harry trained incredibly hard together for the Europeans but a huge blow came when Harry sustained an injury after arriving in Holland at the championships which meant he wouldn’t be able to compete! The team and Suzi had to change their plan quickly and compete on reserve horse River of Thyme (aka Ginge) who they had had very little training with. Despite this they all went out and did an amazing job achieving yet another personal best. This team really have surprised us all and the talent and potential we have at the moment in our club is really exciting for British Vaulting.

Being a relatively small equestrian discipline we rely solely on parental support and fundraising within our clubs to be able to continue our work. Unlike the Olympic disciplines, Dressage, Show Jumping and Eventing, British Vaulting receives no funding from the BEF. It is however becoming increasingly popular in this country and it is really important that we support its continued growth and success. It offers the most wonderful opportunity for children and adults to work together as a team with a horse... it teaches them about discipline, motivation, friendship, sportsmanship whilst keeping fit and active.

We desperately need a new team horse for our club. We are all so excited about the future for this young team and are hoping we can raise the funds we need to secure a new horse and keep their dreams alive.

We ask you, the friends of the English Vaulting Squad to help us invest in the future of Vaulting in the UK.