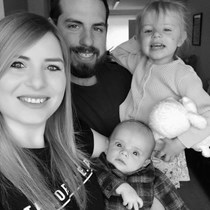 Our 5month baby boy Ethan is lucky to be here with us as he has had an extremely traumatic time in his short little life. He's an amazing little boy but has many problems.

When he was a few hours old his bowel perforated causing ecoli sepsis and meningitis. Since then he's had trouble breathing, gaining weight and mucus building, collapsed lungs, he needs daily suction, low immune system and he has hydrocephalus so needs alot of stimulation as his development is slow. He's just had his second neurosurgery to have a shunt put in place. This was his 3rd operation and we have his next one just around the corner. He's our little miracle who just keeps on fighting. Unfortunately he faces a lifetime of upset and poor health.

The money raised will give us a chance to give back the hospital units involved in Ethan's Story- Kettering SCBU, Leicester Royal infirmary NITU, Addenbrooke's Cambridge hospital and especially Oxford children's hospital.

Ethan has many hospital admissions and operations so he spends more time at hospitals than at home. If it wasn't for these hospitals we wouldn't still have our amazing boy.

We are still searching for answers, and these places have given our little boy chances to make the most of his life despite facing so many difficulties on a daily basis.

No child should have do endure such struggles. Ethan's deserves so much more than the cards he's been dealt with just like many other children and babies like him. Without these hospitals and organisations the treatment and care he needs wouldn't be possible x

Please read ethansstory.co.uk to find out about our amazing brave little boy Ethan. He really is an inspiration and has and still is facing so many difficulties with his health on a daily basis x