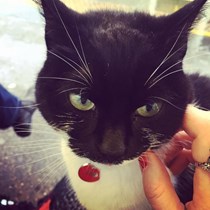 Weʼve raised £3,022 to pay for the Gipsy Hill Cat's operation

Update: Fanny has had her operation and has done well as we could have hoped. In fact she's a bit too lively considering she has only recently had a major op! Her recovery is ongoing and with luck she will back at the station in a few weeks.

In regards to the funds, these will be used in excess of the funds already set aside originally. At the moment there looks like a nice surplus subject to no setbacks. As the RSPCA performed the op at a cheaper price, some will go to them but the lion's share will go to SNARL as previously mentioned.

Thank you again everyone for the fantastic support! We are truly overwhelmed. x

Fanny the cat is most often found seeking and offering cuddles at Gipsy Hill station. She has brought a smile to so many faces young and old.

Sadly, on Wednesday 27 July Fanny was hit by a car close to the station. After a frantic night of worry she was found on Thursday morning. She is a fighter, but very poorly - the vet has diagnosed her with a ruptured diaphragm.

Fanny's humans have launched a fundraiser to pay for her vet bill if the operation goes ahead. It's expected to cost a couple of thousand pounds and Fanny isn't insured.

Please do donate if you can. Any surplus funds will be donated South Norwood Animal Rescue and Liberty (SNARL) - http://www.snarl.org.uk/.