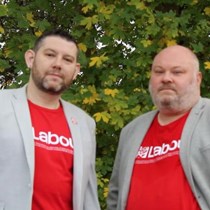 We will also put some of this funding towards starting an LGBTQ+ safe space scheme in Hertsmere.Chris Gray & Chris Myers are Potters Bar Labour Councillors at Hertsmere Borough Council. They are being wrongfully sued for defamation after raising awareness of Tory Cllr Alan Plancey’s use of homophobic language whilst being elected as Mayor.

Recently, Chris & Chris were contacted by a distressed young gay Jewish man about a video from 2014 involving Cllr Plancey making what appeared to be openly homophobic remarks, which is attached below. He was extremely disturbed by the comments, which we believe are simply not acceptable in a modern, pluralistic society, especially from an elected official in a position of power.

Once brought to the Labour Group’s attention that the Tories planned to install Cllr Plancey as Mayor of Hertsmere, all six Labour Councillors signed an open letter raising concerns and seeking clarifications. The First Citizen of the Borough requires an individual who has the trust and confidence of our diverse community. Electing anyone who uses language that appears designed to insult the LGBTQ+ community cannot be acceptable.

At the Council meeting on the 18 November, the two gay councillors attempted to nominate a unity candidate. Chris Gray was silenced by the controlling Tory group, whist trying to convey the hurt caused to the LGBTQ+ community. Cllr Plancey was then elected as Mayor.

His first official act was to use outrageous homophobic language in a BBC interview held on Council premises. He appeared to compare the LGBT community to child predators. This interview is attached below.

The further targeting of Cllr Jeremy Newmark, the Orthodox Jewish Leader of the Hertsmere Labour Group, for rightfully standing up to bigotry alongside Chris and Chris is equally shameful.

All members of the Labour Group acted with integrity and in the clear public interest in taking this stand against bigotry. Suing two gay men for opposing the use of homophobic language and tropes is shocking.

Whilst will be contributing to the costs of fighting this legal action, our funds are limited.. Please contribute whatever you can to our crowd funder to enable us to ensure we can secure legal representation in this fight.

Any unused funds will be donated to LGBTQ+ charity, Stonewall.

We are the first gay couple to be elected as local Councillors on Hertsmere Borough Council, and proudly represent our local area Potters Bar. We pride ourselves in championing the interests of our residents and representing the LGBTQ+ community on a local and national level.