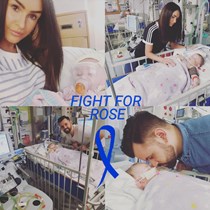 2 months in 3 different hospitals, seeing lots of different drs, neurology teams and baffling so many people, Rose has finally been diagnosed with Guillian barre syndrome. 1 of the worst cases they have seen.Shes currently in intensive care at Leeds general hospital where she remains in a critical condition. Its a rare but serious autoimmune disorder in which the immune system attacks healthy nerve cells in your peripheral nervous system. Its so rare it affects only 1 in 100,000 people and hasn't been seen in a baby so young.

Rose is 9 months old and on tracheal intubation as her diaphgram is now paralyzed. Her whole body has been affected, the nerves themselves and myelin sheath.

In Nov 2017 her hands would tremble and her eyes were droopy. She became very lethargic and stopped attempting to crawl during tummy time. Her arms also became very floppy which was a big indicator to us all that something was very wrong.

Doctors had checked her over twice and stated she was just getting over a viral infection and prescribed her medication.

After a week her symptoms stayed the same, from where she was taken to the nearest drop in clinic. After been assessed she was taken into hospital as the trembling has doctors concerned.

Many tests were done and everything came back negative. After a lumbar puncture, she stopped breathing and needed ventalation support. She was then transferred to Nottingham hospital as she had deteriorated.
After more tests, she eventually got transferred to Leeds general where she has had another mri,lumbar puncture and nerve test wich has come back with a diagnosis. She took a turn for the worst, which left her no option but to be on tracheal intubation as she cannot breathe for herself.Also failed ivig treatments.

After unanswed questions,drs still cannot say she will make a full recovery and we want to give her the best support for now and the future. Parents stay by her bedside.

Thank you for your prayers and support