St Dunstan in the West raised £725 from 27 supporters 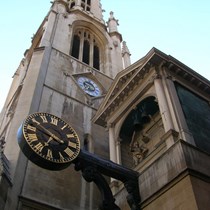 St Dunstan in the West

Weʼve raised £725 to Repair St Dunstan in the West's clock

The clock at St Dunstan-in-the-West is one of the oldest in London, and certainly one of the most interesting. Installed just after the Great Fire of London in 1671, it was the first clock in London to have a minute hand, with two figurines striking the hours and quarters with clubs, turning their heads whilst doing so.

The present clock was installed in 1738 before, in 1828, being moved to the 3rd Marquees of Hertford’s house in Regent’s Park. The Great War saw the Regent’s Park residence housing soldiers blinded from combat. The charity which undertook this went on to name itself after where the clock in the house came from: St Dunstan’s. Our clock was returned to the Church in 1935 by Lord Rothermere to mark the Silver Jubilee of King George V.

Sadly, the clock is now in a significant state of disrepair and without £85,000 of urgent repairs, this historical monument in Fleet Street will very soon stop ticking.

St Dunstan in the West