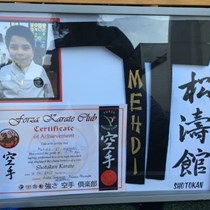 Weʼve raised £80 to remember Mehdi a karate student who lost his life in the Grenfell Fire. Much appreciated contribution in buying memorial bench and plants

A year ago our student Mehdi El-Wahabi, 9 years old with his brother , sister and both of his parents lost their lives in the most horific fire blaze at Grenfell Tower in London. Mehdi was one of the most cheerful and sweetest soul who always with a song and smile started each lesson . We are dearly missing him at O.G.P.S. dojo. He is our black belt samurai who will be always part of our hearts .

In memory of his passing we would like to honour him and his dearest family a memory bench and few plants which will be allocated at the school plaground where Mehdi attended with his karate friends . Also , El-Wahabi family left behind one sick grandmother in Morocco who was depended on funds from his mother . With the money left over we would support her too.

Forza Shotokan Karate Club is ever so grateful if you could spare as little as you can to make this memory valuable for his friends from the club and for the community .

from all of our